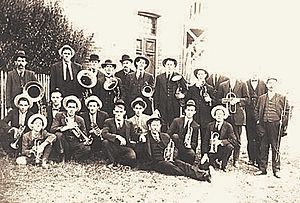 It was the epicenter of the 1989 Newcastle earthquake. Boolaroo borders a number of well-known towns and suburbs within the Lake Macquarie Region, including Warners Bay and Speers Point, and, for a small strip of land, fronts onto Lake Macquarie itself.

Within Boolaroo is Cockle Creek railway station, a small station on the Central Coast & Newcastle Line. Also, Boolaroo previously housed a lead/zinc smelter, owned by the former Pasminco (now Zinifex) however the site has been cleared since the smelter ceased operations in 2003.

Boolaroo is home to several churches, of various denominations, as well as Boolaroo Public School, a library, a cinema (which was partially destroyed in the 1989 Newcastle earthquake) and a number of shops, including a small supermarket and a military disposal store.

All content from Kiddle encyclopedia articles (including the article images and facts) can be freely used under Attribution-ShareAlike license, unless stated otherwise. Cite this article:
Boolaroo, New South Wales Facts for Kids. Kiddle Encyclopedia.