Borden is a town in Wood Township, Clark County, Indiana, United States. The population was 808 at the 2010 census. The town's official name was New Providence until December 29, 1994. 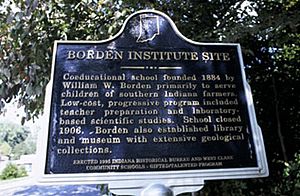 The town was founded in 1816 by Rhode Islander John Borden and was originally named New Providence, after the Rhode Island capital of Providence. William W. Borden (1823–1906), son of John Borden, was a scholar, philanthropist and distinguished citizen of New Providence and earned his wealth in the Leadville, Colorado, silver mines, becoming one of Clark County's wealthiest citizens.

In 1884, the Borden Institute was founded by William W. Borden as a college for teacher preparation and laboratory-based scientific studies. He also established within the town a library and a museum with an extensive geological collection that later became an important and valuable collection in Chicago's Field Museum following his death. His final crown jewel within the community was his elaborate family mansion situated on a hill overlooking the town. The town honored William W. Borden by unofficially renaming the town and post office Borden because of his generosity and influence within the community his father founded. The Borden Institute closed in 1906 and around 1910 became used as William W. Borden High School, or simply Borden High School. The Institute served this purpose until 1955 when a new elementary and Jr-Sr High School were built adjacent to the Institute. The museum still stands and houses some of the original books from the Borden Library and is currently used as a community center. The Borden Mansion also still stands and has been occupied by the Emil Stark family since the early 1970s. Following its use as a high school, the Borden Institute fell into disrepair and was razed in 1983 even after a decade long effort by citizens to preserve it.

Borden is served by the CSX (formally Monon) rail system and was once one of the main loading points for carloads of strawberries shipped by The Borden-Pekin Berry Growers Association north along the Monon Rail. The large volume of strawberries supplied by the area farmers influenced the naming of the athletic teams at Borden High School. The teams were nicknamed the Borden Berries in 1934 and the name was used until 1966 when it was changed by the student body to the Borden Braves. Strawberries continue to be farmed in the Borden area, especially in nearby Starlight, Indiana where the Starlight Strawberry Festival is held each Memorial Day weekend.

A well known establishment in Borden is Brewer's General Store. This family owned store was opened by John Brewer in 1931 and was owned and managed by the extended Brewer family until its closing in 2012. Due to Borden's rural setting, Brewer's took pride in marketing itself as a provider of goods in the scenic "Hillbilly" Valley. Favorites of the store included a large wheel of Wisconsin Rat Trap Cheese, Amish hard candies and Hillbilly Popsickles (large dill pickles served on a wooden stick).

In the 1960s, several dams were constructed along the tributaries leading to Muddy Fork, which runs through the town. This helped keep Borden from being flooded during heavy rains. On April 3, 1974, a F4 tornado struck the west side of Borden before moving into nearby Daisy Hill, killing one person. On May 27, 2004, an F2 tornado struck the northern edge of the town, doing damage to homes and the trees on the hillside but causing no deaths. On March 2, 2012, another F4 tornado hit nearby Pekin and the northern Borden community of Daisy Hill before moving along to Henryville and points further northeast. This tornado did extensive damage to these areas and was responsible for deaths in Pekin, Henryville, and other Indiana towns and counties.

In the early 2000s, William W. Borden High School underwent an expansion project and a new building was built in place of the school parking lot. A new parking lot was then built at the old Borden Park. With the help of donations from the community and the generosity of the Koetter Family of Starlight, the town then built a new Borden Community Park on the East end of Borden near the former Kimball International plant, along Muddy Fork. It includes basketball and tennis courts, a soccer field, a little league baseball complex, a walking path along the fork, and a war memorial for local residents who served in the military. The Borden Valley Day Festival is held in the park annually on the second Saturday in June.

In 2013, Borden High School won its first semi-state and state championships. The Braves beat University in the Semi-State round 47-44 in front of a standing room-only crowd in nearby Seymour, Indiana. On March 23, 2013, the Borden Braves as well as the entire town, came into Bankers Life Fieldhouse and won their first state championship 55-50. Cody Bachman held Triton stand out Clay Yeo to 26 points. After this state championship run, there was a video made about the Borden Braves titled How 'Bout Them Braves which was the rallying cry of the Borden faithful during the run.

One local native is Joe Huber, who is regionally known as the founder of the Joe Huber's Family Farm and Restaurant in Starlight. Norman M. Coats of Kirkwood, Missouri has written a book called Growing Up on Daisy Hill, which chronicles his early years being born and raised in the nearby hills and hollows of Borden during the Great Depression. Borden is also the current home of nine-time ARCA champion Frank Kimmel. 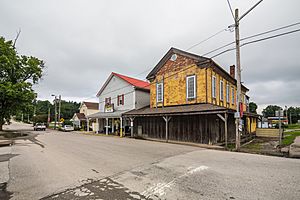 There were 321 households of which 39.9% had children under the age of 18 living with them, 50.2% were married couples living together, 13.1% had a female householder with no husband present, 5.9% had a male householder with no wife present, and 30.8% were non-families. 25.5% of all households were made up of individuals and 11.2% had someone living alone who was 65 years of age or older. The average household size was 2.52 and the average family size was 3.04.

There were 331 households out of which 34.4% had children under the age of 18 living with them, 57.1% were married couples living together, 9.1% had a female householder with no husband present, and 30.2% were non-families. 25.7% of all households were made up of individuals and 8.2% had someone living alone who was 65 years of age or older. The average household size was 2.47 and the average family size was 2.97.

All content from Kiddle encyclopedia articles (including the article images and facts) can be freely used under Attribution-ShareAlike license, unless stated otherwise. Cite this article:
Borden, Indiana Facts for Kids. Kiddle Encyclopedia.