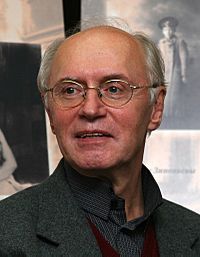 Boris Grigoryevich Plotnikov (Russian: Борис Григорьевич Плотников; 2 April 1949 – 2 December 2020) was a Soviet and Russian actor. His career began in 1970 and he retired in 2019. Plotnikov appeared in more than seventy movies and television series. He was born in Nevyansk, Soviet Union.

His best known roles were as Sotnikov in the 1977 drama movie The Ascent, as Nikolai in the 1988 crime movie The Cold Summer of 1953 and as Ivan in the 1988 science fiction television movie Heart of a Dog.

All content from Kiddle encyclopedia articles (including the article images and facts) can be freely used under Attribution-ShareAlike license, unless stated otherwise. Cite this article:
Boris Plotnikov Facts for Kids. Kiddle Encyclopedia.