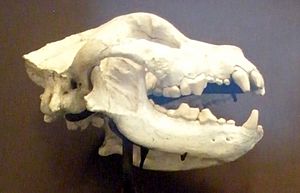 Skull of a species of Borophagus

Borophagus is an extinct genus of the Canidae family, endemic to North America. The species were similar in appearance to modern-day hyenas, and weighed between 20 kilograms (44 lb) and 40 kilograms (88 lb). There are eight known species that lived from around 12 million years ago to about 2 million years ago.

All content from Kiddle encyclopedia articles (including the article images and facts) can be freely used under Attribution-ShareAlike license, unless stated otherwise. Cite this article:
Borophagus Facts for Kids. Kiddle Encyclopedia.