The Boston Aquarial and Zoological Gardens (October 1860 – June 1862) in Boston, Massachusetts, featured a public aquarium and zoo. It was located in the Financial District on Central Court (off Washington Street). On display were "hundreds of specimens of the finny tribe there to be seen sporting in their native element, in all their variety of hue and shape" as well as other animals. James Ambrose Cutting and Henry D. Butler ran the business, derived from an earlier incarnation known as the Boston Aquarial Gardens.P.T. Barnum bought it in 1862, renovated it, and reopened it as Barnum's Aquarial Gardens. 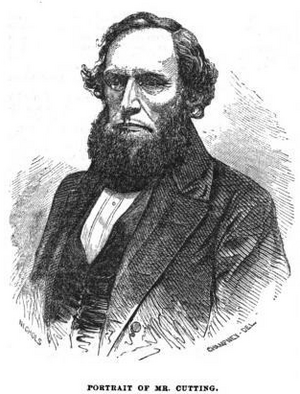 "The gardens were officially opened to the public on October 5th, 1860. The zoological department had added a moose, a leopard, an African python, and several seals. The prices remained fixed at 25 cents for adults and ten cents for children. In February 1861, a newly discovered species of sea anemone, Trochartea pendula, was presented. ... By that time, the Aquarial department had grown to include a collection of eels, trout, haddock, shrimp and dogfish. ... Downstairs in the zoological department, an alligator shared a cage with a snapping turtle, a box turtle, and an African ibis. There was also a pair of lions, a leopard, a grizzly bear, black bears, assorted monkeys and parrots, an albino flying squirrel, deer, owls, and foxes. The 'den of serpents' included an anaconda, pythons, a pine snake and a black snake." In 1861, "the Zoological Department [was] under the charge of Uriah Sears who ... trained the bears, the kangaroos, the moose and the baboon to perform wonderful feats in the ring." 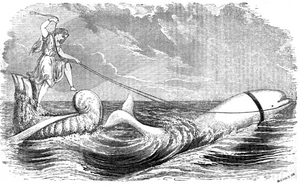 "Mademoiselle Leone driving the whale, at the Aquarial Gardens," Boston, 1862

The proprietors added a live beluga whale to the collection in 1861. It was the first cetacean ever kept in captivity in the modern world.

"The present whale, now an active swimming resident of our city, was caught in the St. Lawrence River, Upper Canada, between the Orelle and DuLoup rivers. His capture was secured by weirs, a sort of trap made of wooden stakes, inclosing an area of several miles of water, but so shaped as to concenter to a point where big fish are nabbed. ... Having been secured he was placed in a huge box for transportation. Before this was accomplished however, the whale gave its captors very much trouble by his powerful flappings, jumpings &c. &c., having floundered some Frenchmen several times, much to their peril and inconvenience. The box was lined with sea-weed, and was partially covered at the top with slats. The precious freight was then carried 7 miles over one of the roughest roads in Canada, and from thence by rail 500 miles to Boston, by special trains. ... At each station the monster was well watered, as if he had been a locomotive. The aqueous attentions were quite necessary during the journey of 60 hours. All along the route the distinguished traveller was the object of great curiosity, and the most animated conversation. On being placed in the huge tank at the Aquarial Gardens, the process of which was witnessed by hundreds with the most intense interest, the whale at once swam in the most lively and graceful manner!" 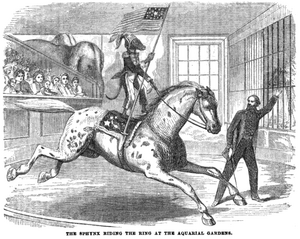 "The sphinx riding the ring at the Aquarial Gardens," 1862

By 1869 "the skeleton of the specimen exhibited at the ... Gardens ... [was] in the Museum of Comparative Zoology ... presented by Mr. Cutting."

Visitors could also see a so-called "sphinx." "We well remember [the sphynx] when it first arrived at the Gardens -- a dull, obstinate, seemingly unteachable brute. Now, however, he is one of the great cards of the institution. Nothing can be more amusing than his equestrian feats, whether he appears as a volunteer, flag in hand or as a fast young man on an hired horse. Then his other performances in the ring are infinitely grotesque. He wheels a barrow, personifies laziness to the life, feigns insensibility, carries a heavy log, mounts a pole, and travels around the ring on the hand rail."

In 1862 P.T. Barnum "bought the establishment and closed it for extensive renovations. When it reopened as Barnum's Aquarial Gardens he announced that the Gardens would be associated with the American Museum in New York and that he hoped 'to form such a happy blending of amusement with instruction so as not to depend solely upon the scientific public for support, but to render this establishment attractive and popular with all respectable classes.' James Cutting was then engaged to remain at the Gardens and take charge of the living whale, the seals, and other rare animals."

All content from Kiddle encyclopedia articles (including the article images and facts) can be freely used under Attribution-ShareAlike license, unless stated otherwise. Cite this article:
Boston Aquarial and Zoological Gardens Facts for Kids. Kiddle Encyclopedia.