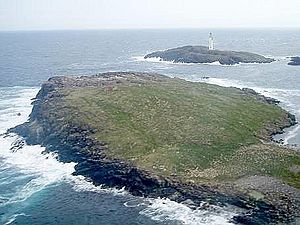 An aerial view of Grunay with Bound Skerry in background

Bound Skerry is part of the Out Skerries group in the Shetland Islands. As well as being the most easterly island of that group, it is also the easternmost point of Scotland.

It has a lighthouse on it, which was built in 1857 at a cost of £21,000. Robert Louis Stevenson's family were lighthouse builders, and his signature can be seen in its guestbook. The keepers lived on nearby Grunay.

The island was bombed twice in World War II by the German Luftwaffe, because it was suspected to harbour a munitions factory.

All content from Kiddle encyclopedia articles (including the article images and facts) can be freely used under Attribution-ShareAlike license, unless stated otherwise. Cite this article:
Bound Skerry Facts for Kids. Kiddle Encyclopedia.