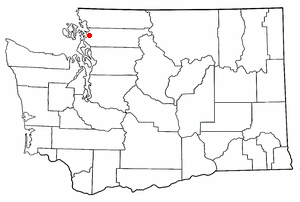 Bow is an unincorporated community in Skagit County, Washington. It is located near the towns of Bay View, Edison, Burlington, and Mount Vernon. Bow is included in the Mount Vernon-Anacortes, Washington Metropolitan Statistical Area. Bow overlooks Samish Bay.

The 2 ft (610 mm) narrow gauge Bow Hill Railroad, complete with a working steam locomotive, is located in the Bow area. It can be found on the private property of Diz Schimke, who allows the public to ride the train during Christmastime in exchange for donations to the Alger food bank.

Bow was originally known as Brownsville, after William J. Brown, who homesteaded the townsite in 1869. The advent of the railroad resulted in a population boom and the need for a post office. Apparently inspired by the growth brought by the railroad, Brown suggested the new name of Bow, after the large railway station in London, England, which in turn was named for the bow or poplar tree. Although this is the most common belief, there are some who believe it was named after homesteader James T. Bow.

Bow is located in Skagit County, Washington, in the Mount Vernon-Anacortes metro area. It is located on Samish Bay, and is surrounded by dikes and contains part of a traditional flood plain.

All content from Kiddle encyclopedia articles (including the article images and facts) can be freely used under Attribution-ShareAlike license, unless stated otherwise. Cite this article:
Bow, Washington Facts for Kids. Kiddle Encyclopedia.