The Bow River pathway is a pathway system developed along the banks of the Bow River in the city of Calgary. It contains a network of pedestrian and bicycle paths connecting parks on both sides of the river. 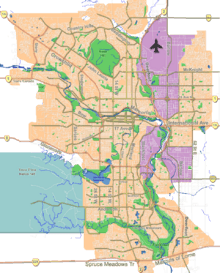 The pathway is integrated with Crowchild Trail bridge

Two-level bridge across the Bow River near Downtown West End, with C-Train light rail on the upper level and pathway on the lower level. 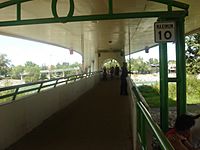 Crossing the river beneath the C-Train bridge

The pathway is used for cycling, hiking, jogging, as well as rollerblading and skateboarding. The paths are connected with a system that extends along the Elbow River and other areas of the city.

Construction of the Bow River Pathways started in 1975 to mark the city's centenary. The project was funded by the City of Calgary, the Province of Alberta and the Devonian Group of Charitable Foundations. It was dedicated on June 25, 1977.

Recreation areas connected by the pathway include:

All content from Kiddle encyclopedia articles (including the article images and facts) can be freely used under Attribution-ShareAlike license, unless stated otherwise. Cite this article:
Bow River pathway Facts for Kids. Kiddle Encyclopedia.