The genus Bowenia includes two living and two fossil species of cycads in the family Stangeriaceae, sometimes placed in their own family Boweniaceae. They are entirely restricted to Australia. The two living species occur in Queensland. B. spectabilis grows in warm, wet, tropical rainforests, on protected slopes and near streams, primarily in the lowlands of the Wet Tropics Bioregion. However, it has a local form with serrate pinna margins that grows in rainforest, Acacia-dominated transition forest, and also Casuarina-dominated sclerophyll forest on the Atherton Tableland, where it is subject to periodic bushfire. B. serrulata grows in sclerophyll forest and transition forest close to the Tropic of Capricorn. 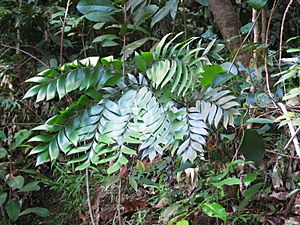 Bowenia spectabilis in the Daintree Rainforest in northeast Queensland, Australia 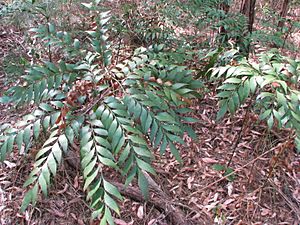 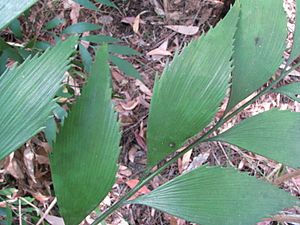 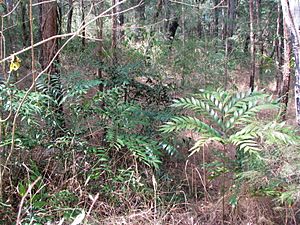 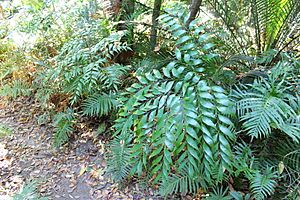 Bowenia serrulata growing in transition forest near Byfield, in the Capricornia region of Queensland, Australia

All content from Kiddle encyclopedia articles (including the article images and facts) can be freely used under Attribution-ShareAlike license, unless stated otherwise. Cite this article:
Bowenia Facts for Kids. Kiddle Encyclopedia.