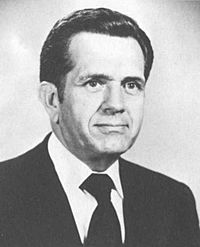 Boyd Kenneth Packer (September 10, 1924 – July 3, 2015) was an American religious leader and former educator. He was the president of the Quorum of the Twelve Apostles of The Church of Jesus Christ of Latter-day Saints (LDS Church).

Packer was born in Brigham City, Utah. He studied at Utah State University and at Brigham Young University. Packer was married to Donna Smith. They had ten children.

Packer has served as a general authority of the church since 1961. Before his death, he was the second most senior apostle among the ranks of the church.

Packer died of natural causes at his home in Cottonwood Heights, Utah, aged 90.

All content from Kiddle encyclopedia articles (including the article images and facts) can be freely used under Attribution-ShareAlike license, unless stated otherwise. Cite this article:
Boyd K. Packer Facts for Kids. Kiddle Encyclopedia.