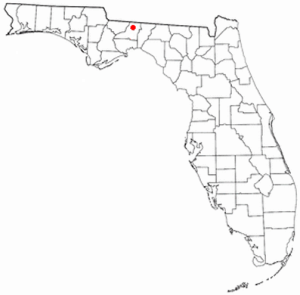 Bradfordville is an unincorporated community in northern Leon County, Florida, United States. It is 8 miles (13 km) north of Tallahassee and south of the Florida/Georgia state line by 8 miles (13 km) at the intersection of US 319 and County Road 0342 (Bannerman Road/Bradfordville Road). Elevation is 237 feet (72 m).

Bradfordville has rolling hills and ravines spotted with lakes and ponds. Lake Iamonia, one of Florida's larger natural lakes, is northwest of Bradfordville. Bradfordville is within the noted Red Hills Region.

Bradfordville began as a settlement between 1829 and 1832 when the Bradford brothers moved to the area from around Enfield, Halifax County, North Carolina to farm large tracts of land.

The Bradfordville School was constructed between the years 1884-1892 on a small piece of land owned by the Lester family. The school, a wood framed vernacular structure, represents a typical one-room schoolhouse mentioned in rural American history. It qualifies for the National Register and has been preserved and now resides on the southwest section of Bannerman Road.

In the early 1900s, Bradfordville had two general stores, a justice of the peace (Judge Whitehead), and a Saturday meat market ran by Tommy Carr. Greene Johnson ran a trading post that supplied staple goods like sugar and flour. Today that building, after restoration, is an animal hospital.

Bradfordville is now an area with a few large homes and is at the east-southeast tip of the large housing development of Killearn Lakes Plantation. It is mostly a major commercial area that contains Lawton Chiles High School, 4 branch banks, 3 major retail stores (Target, Publix, Walgreens) plus a variety of other smaller retail stores.

The proposed Red Hills Coastal Parkway, a tolled eastern bypass of Tallahassee, would have its northern terminus in Bradfordville.

All content from Kiddle encyclopedia articles (including the article images and facts) can be freely used under Attribution-ShareAlike license, unless stated otherwise. Cite this article:
Bradfordville, Florida Facts for Kids. Kiddle Encyclopedia.