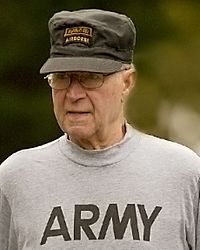 Bradley Earl Ayers (March 7, 1935 – February 10, 2017) was an American soldier, CIA operative, writer and political activist. He was known for saying that the CIA played a role in the Assassination of Robert F. Kennedy. Ayers was one of the first career officers to voice opposition to the Vietnam War and to speak out publicly against it. He was born in St. Paul, Minnesota.

All content from Kiddle encyclopedia articles (including the article images and facts) can be freely used under Attribution-ShareAlike license, unless stated otherwise. Cite this article:
Bradley Ayers Facts for Kids. Kiddle Encyclopedia.