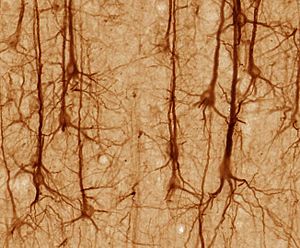 Neurons are the excitable cells of the brain that function by communicating with other neurons and interneurons in neural circuits and larger brain networks. The two main neuronal classes in the cerebral cortex are excitatory projection neurons, and inhibitory interneurons; around 70-80 per cent are neurons, and 20-30 per cent inhibitory interneurons. Neurons are often grouped into a nucleus where they usually have roughly similar connections and functions. Nuclei are connected to other nuclei by tracts.

Glia are the supporting cells of the neurons and have many functions not all of which are clearly understood. Glia are grouped into macroglia of astrocytes, ependymal cells, and oligodendrocytes, and much small microglia. Astrocytes are seen to be capable of communication with neurons involving a signalling process similar to neurotransmission called gliotransmission. 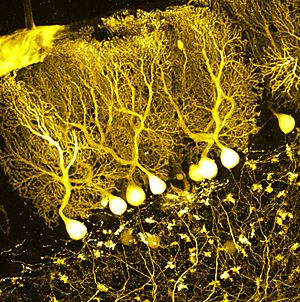 Purkinje cells in the cerebellum

Brain cell types are the functional neurons, and supporting glia.

Neurons also called nerve cells are the functional electrically excitable cells of the brain. They can only function in collaboration with other neurons and interneurons in a neural circuit. There are an estimated 100 billion neurons in the human brain. Neurons are polarised cells that are specialised for the conduction of action potentials also called nerve impulses. They can also synthesise membrane and protein. Neurons communicate with other neurons using neurotransmitters released from their synapses, and they may be inhibitory, excitatory or neuromodulatory. Neurons may be termed by their associated neurotransmitter such as excitatory dopaminergic neurons and inhibitory GABAergic neurons.

Cortical interneurons only make up around a fifth of the neuronal population but they play a major role in modulating cortical activity needed for cognition and many aspects of learning and memory. Cortical interneurons vary in shape, molecular make-up, and electrophysiology; they function collectively to maintain the balance between excitation and inhibition in the cortex primarily through the use of GABA. Disruption of this balance is a common feature of neuropsychiatric disorders such as schizophrenia. A cause of the disruption can occur in prenatal development through the exposure to chemicals and environment.

In the cerebral cortex different neurons occupy the different cortical layers and include the pyramidal neurons and rosehip neurons. In the cerebellum Purkinje cells and interneuronal Golgi cells predominate. 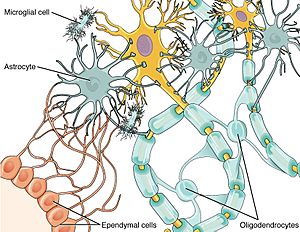 Glial cells are the supporting cells of the neurons. The three types of glial cells are astrocytes, oligodendrocytes, and ependymal cells, known collectively as macroglia, and the smaller scavenger cells known as microglia. Glial stem cells are found in all parts of the adult brain. Glial cells greatly outnumber neurons and apart from their supporting role to neurons, glia – astrocytes in particular have been acknowledged as being able to communicate with neurons involving a signalling process similar to neurotransmission called gliotransmission. They cannot produce an action potential as generated by a neuron but in their large numbers they can produce chemicals expressing excitability that exert an influence on neural circuitry. The star-like shape of the astrocyte allows contact with a great many synapses.

All content from Kiddle encyclopedia articles (including the article images and facts) can be freely used under Attribution-ShareAlike license, unless stated otherwise. Cite this article:
Brain cell Facts for Kids. Kiddle Encyclopedia.