Brandt's cormorant (Phalacrocorax penicillatus) is a strictly marine bird of the cormorant family of seabirds that inhabits the Pacific coast of North America. It ranges, in the summer, from Alaska to the Gulf of California, but the population north of Vancouver Island migrates south during the winter. Its specific name, penicillatus is Latin for a painter's brush (pencil of hairs), in reference to white plumes on its neck and back during the early breeding season. The common name honors the German naturalist Johann Friedrich von Brandt of the Academy of Sciences at St. Petersburg, who described the species from specimens collected on expeditions to the Pacific during the early 19th century. The average size of a Brandt's cormorant is 4.6 pounds. They have a length of about 34 inches and their wingspan is 4 feet.

Brandt's cormorants feed either singly or in flocks, and are adaptable in prey choice and undersea habitat. It feeds on small fish from the surface to sea floor, obtaining them, like all cormorants, by pursuit diving using its feet for propulsion. Prey is often what is most common: in central California, rockfish from the genus Sebastes is the most commonly taken, but off British Columbia, it is Pacific herring. Brandt's cormorants have been observed foraging at depths of over 36.5 m (120 ft) .

During the breeding season, adults have a blue throat patch. This species nests on the ground or on rocky outcroppings. Año Nuevo Island is an important seabird breeding colony in the Monterey Bay National Marine Sanctuary, hosting Brandt’s cormorants among other species of seabirds. 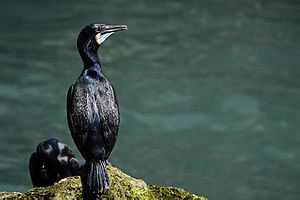 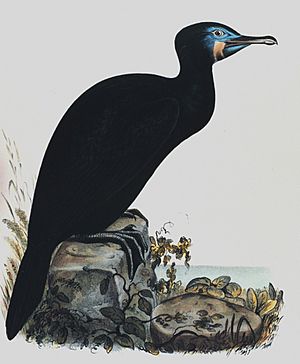 Brandt's cormorants live on the Pacific coast of North America, in habitats such as bays, estuaries, and lagoons. They typically live in groups. They breed between March and August, and usually have 4 eggs.Young birds are cared for by both parents.

Brandt's cormorants mostly eat fish such as herring and rockfish, but their diet can include other fish as well as shrimp and crabs. To hunt, they dive beneath the surface of the ocean to catch fish. They can dive over 200 feet deep. They can hunt either in groups or alone.

All content from Kiddle encyclopedia articles (including the article images and facts) can be freely used under Attribution-ShareAlike license, unless stated otherwise. Cite this article:
Brandt's cormorant Facts for Kids. Kiddle Encyclopedia.