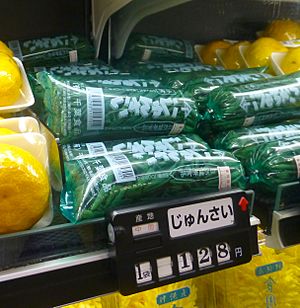 For sale in a Japanese supermarket, 2014

Brasenia is a perennial aquatic plant with floating, peltate leaves and rhizomatous stems. It is identified by its bright green leaves, small purple flowers that bloom from June through September, and a thick mucilage that covers all of the underwater organs, including the underside of the leaves, stems, and developing buds. This mucilage may be an anti-herbivore defence trait, perhaps to deter snail grazing. It grows in shallow water of lakes, rivers and beaver ponds, particularly those with somewhat acidic water. 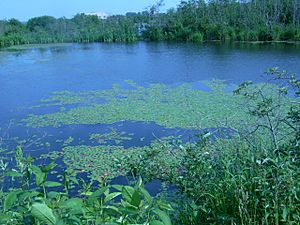 Brasenia exhibits wind pollination. The flowers have a two-day blooming period. On the first day, the functionally female, or pistillate flower, extends above the surface of the water and exposes the receptive stigmas. The flower then recedes below the water surface and on the following day emerges as a functionally male, or staminate flower. It is elevated higher than on the previous day and the anther-bearing filaments are extended beyond the female carpels. The anthers dehisce, releasing the pollen, and the flower is then withdrawn below the water where the fruit develops.

The mucilage it produces has been found to have anti-algal and anti-bacterial properties that may be useful as a natural weed control .

Species of Brasenia occurred during the interglacial of Europe, but like many other aquatic plant species and genera, it does not occur there now.

The genus may commemorate the surgeon and Moravian missionary Christoph Brasen (1738-1774), who was the first superintendent of the Moravian mission at Nain in Labrador.

All content from Kiddle encyclopedia articles (including the article images and facts) can be freely used under Attribution-ShareAlike license, unless stated otherwise. Cite this article:
Brasenia Facts for Kids. Kiddle Encyclopedia.