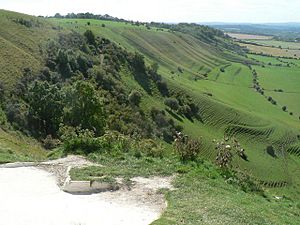 Bratton Downs is a 395.8 hectare biological and geological Site of Special Scientific Interest in Wiltshire, England, near the villages of Bratton and Edington, and about 3 miles (5 km) east of the town of Westbury. It was notified in 1971. The designated area consists mainly of chalk grassland, as well as some ancient woodland, and supports a diverse range of native flora and fauna. It overlays notable geological features—principally landforms created by glaciation in the Pleistocene.

The Bratton Downs SSSI includes parts of the Westbury, Combe, White Cliff, Picquet, Patcombe and Edington Hills, as well as the Combe Bottom, Longcombe Bottom and Lutcombe Bottom combes. The Wessex Ridgeway long-distance footpath passes through part of the SSSI. The Westbury White Horse is on the slope of Westbury Hill, on the edge of Bratton Downs. Bratton Camp, an Iron Age hill fort, stands on a 225-metre (738 ft) top immediately east of the horse; the fort is surrounded by the designated area but does not form part of it. 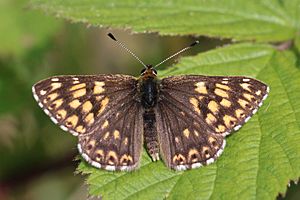 All content from Kiddle encyclopedia articles (including the article images and facts) can be freely used under Attribution-ShareAlike license, unless stated otherwise. Cite this article:
Bratton Downs Facts for Kids. Kiddle Encyclopedia.