Braunston Tunnel is on the Grand Union Canal about 830 yds (760 m) east of Braunston, Northamptonshire, England top lock. It is in the northern outskirts of Daventry, about 2 km east of the village of Braunston.

It was opened in 1796. Its construction was delayed by soil movement and it was probably the resulting movement that led to the tunnel having a slight 'S' bend. There is room for two 7 ft (2.13 m) beam boats to pass. There are three air shafts along its length.

The tunnel passes underground alongside another Grand Union Canal feature, Drayton Reservoir, from which the feeder enters the canal at the east end of the tunnel. 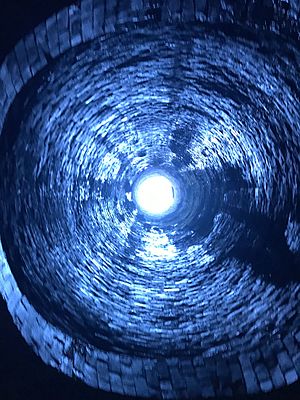 View of the 2nd air shaft from inside Braunston Tunnel

All content from Kiddle encyclopedia articles (including the article images and facts) can be freely used under Attribution-ShareAlike license, unless stated otherwise. Cite this article:
Braunston Tunnel Facts for Kids. Kiddle Encyclopedia.