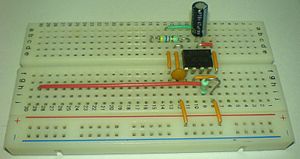 Breadboard is an electronic tool which can be used to test electrical circuits. In that case soldering is not needed. A breadboard is a construction base for prototyping of electronics. Originally it was literally a bread board, a polished piece of wood used for slicing bread. In the 1970s the solderless breadboard (AKA plugboard, a terminal array board) became available and nowadays the term "breadboard" is commonly used to refer to these.

Because the solderless breadboard does not require soldering, it is reusable. This makes it easy to use for creating temporary prototypes and experimenting with circuit design. For this reason, solderless breadboards are also extremely popular with students and in technological education. Older breadboard types did not have this property. A stripboard (Veroboard) and similar prototyping printed circuit boards, which are used to build semi-permanent soldered prototypes or one-offs, cannot easily be reused. A variety of electronic systems may be prototyped by using breadboards, from small analog and digital circuits to complete central processing units (CPUs). 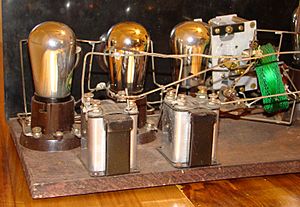 This 1920s TRF radio manufactured by Signal was constructed on a wooden breadboard.

In the early days of radio, amateurs nailed bare copper wires or terminal strips to a wooden board (often literally a board to slice bread on) and soldered electronic components to them. Sometimes a paper schematic diagram was first glued to the board as a guide to placing terminals, then components and wires were installed over their symbols on the schematic. Using thumbtacks or small nails as mounting posts was also common.

Breadboards have evolved over time, with the term now being used for all kinds of prototype electronic devices. For example, US Patent 3,145,483, was filed in 1961 and describes a wooden plate breadboard with mounted springs and other facilities. US Patent 3,496,419, was filed in 1967 and refers to a particular printed circuit board layout as a Printed Circuit Breadboard. Both examples refer to and describe other types of breadboards as prior art.

The breadboard most commonly used today is usually made of white plastic and is a pluggable (solderless) breadboard. It was designed by Ronald J. Portugal in 1971. 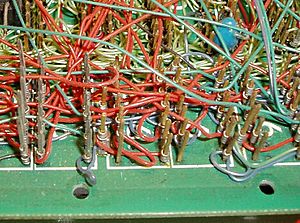 Alternative methods to create prototypes are point-to-point construction (reminiscent of the original wooden breadboards), wire wrap, wiring pencil, and boards like the stripboard. Complicated systems, such as modern computers comprising millions of transistors, diodes, and resistors, do not lend themselves to prototyping using breadboards, as their complex designs can be difficult to lay out and debug on a breadboard.

Modern circuit designs are generally developed using a schematic capture and simulation system, and tested in software simulation before the first prototype circuits are built on a printed circuit board. Integrated circuit designs are a more extreme version of the same process: since producing prototype silicon is costly, extensive software simulations are performed before fabricating the first prototypes. However, prototyping techniques are still used for some applications such as RF circuits, or where software models of components are inexact or incomplete.

You could also use a square grid of pairs of holes where one hole per pair connects to its row and the other connects to its column. This same shape can be in a circle with rows and columns each spiraling opposite clockwise/counterclockwise.

A modern solderless breadboard socket consists of a perforated block of plastic with numerous tin plated phosphor bronze or nickel silver alloy spring clips under the perforations. The clips are often called tie points or contact points. The number of tie points is often given in the specification of the breadboard.

The spacing between the clips (lead pitch) is typically 0.1 in (2.54 mm). Integrated circuits (ICs) in dual in-line packages (DIPs) can be inserted to straddle the centerline of the block. Interconnecting wires and the leads of discrete components (such as capacitors, resistors, and inductors) can be inserted into the remaining free holes to complete the circuit. Where ICs are not used, discrete components and connecting wires may use any of the holes. Typically the spring clips are rated for 1 ampere at 5 volts and 0.333 amperes at 15 volts (5 watts). The edge of the board has male and female notches so boards can be clipped together to form a large breadboard.

Solderless breadboards are available from several different manufacturers, but most share a similar layout. The layout of a typical solderless breadboard is made up from two types of areas, called strips. Strips consist of interconnected electrical terminals. 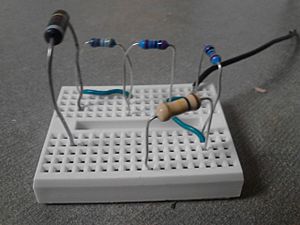 Breadboard consisting of only terminal strips but no bus strips

Terminal strips
The main areas, to hold most of the electronic components.
In the middle of a terminal strip of a breadboard, one typically finds a notch running in parallel to the long side. The notch is to mark the centerline of the terminal strip and provides limited airflow (cooling) to DIP ICs straddling the centerline. The clips on the right and left of the notch are each connected in a radial way; typically five clips (i.e., beneath five holes) in a row on each side of the notch are electrically connected. The five rows on the left of the notch are often marked as A, B, C, D, and E, while the ones on the right are marked F, G, H, I and J. When a "skinny" dual in-line pin package (DIP) integrated circuit (such as a typical DIP-14 or DIP-16, which have a 0.3-inch (7.6 mm) separation between the pin rows) is plugged into a breadboard, the pins of one side of the chip are supposed to go into row E while the pins of the other side go into row F on the other side of the notch. The columns are numbered 1 - 50 or whatever number of columns there are.

Bus strips
To provide power to the electronic components.
A bus strip usually contains two rows: one for ground and one for a supply voltage. However, some breadboards only provide a single-row power distributions bus strip on each long side. Typically the row intended for a supply voltage is marked in red, while the row for ground is marked in blue or black. Some manufacturers connect all terminals in a column. Others just connect groups of, for example, 25 consecutive terminals in a column. The latter design provides a circuit designer with some more control over crosstalk (inductively coupled noise) on the power supply bus. Often the groups in a bus strip are indicated by gaps in the color marking.
Bus strips typically run down one or both sides of a terminal strip or between terminal strips. On large breadboards additional bus strips can often be found on the top and bottom of terminal strips.
Note there are two different common alignments for the power bus strips. On small boards, with about 30 rows, the holes for the power bus are often aligned between the signal holes. On larger boards, about 63 rows, the power bus strip holes are often in alignment with the signal holes. This makes some accessories designed for one board type incompatible with the other. For example, some Raspberry Pi GPIO to breadboard adapters use offset aligned power pins, making them not fit breadboards with aligned power bus rows. There are no official standards, so the users need to pay extra attention to the compatibility between a specific model of breadboard and a specific accessory. Vendors of accessories and breadboards are not always clear in their specifications of which alignment they use. Seeing a close up photograph of the pin/hole arrangement can help determine compatibility.

Some manufacturers provide separate bus and terminal strips. Others just provide breadboard blocks which contain both in one block. Often breadboard strips or blocks of one brand can be clipped together to make a larger breadboard.

In a more robust variant, one or more breadboard strips are mounted on a sheet of metal. Typically, that backing sheet also holds a number of binding posts. These posts provide a clean way to connect an external power supply. This type of breadboard may be slightly easier to handle. Several images in this article show such solderless breadboards.

All content from Kiddle encyclopedia articles (including the article images and facts) can be freely used under Attribution-ShareAlike license, unless stated otherwise. Cite this article:
Breadboard Facts for Kids. Kiddle Encyclopedia.