Breakers Hotel is a landmark 14-story building on East Ocean Avenue in downtown Long Beach, California. The building opened in 1926 as a luxury oceanfront resort hotel. The building has gone through multiple changes of ownership and has been renamed at various times the Hilton, the Wilton, and the Breakers International Hotel. It has had a history of financial problems and closures and operated for many years as a retirement home. The building has been designated as a Long Beach Historic Landmark.

The Breakers Hotel was developed by a local Long Beach banker and capitalist, Fred B. Dunn. Construction began in the fall of 1925 with a projected cost of $2,250,000.

The original structure consisted of a single-story base that spanned an entire city block with a central tower rising thirteen stories above the main body of the building. The complex also included arcade and basement floors beneath the Ocean Boulevard level.

The development, with architecture described at the time as "ultra Spanish," opened in September 1926. At the time, the total cost of the luxurious building was said to be $3,000,000. The building opened with a banquet and dinner at which Long Beach's Mayor Condit and Fred Dunn spoke of an era of success. The banquet also included a program of entertainment by vaudeville artists.

When the hotel opened in 1926 (three years before the opening of the Villa Riviera), the building's imposing tower, rising 15 stories from the beach, gave it "a prominence greater than that of any other in the city." On its opening, the Breakers was promoted as one of Southern California's finest luxury resort hotels. The hotel had 330 guest rooms and 232 ft (71 m) of prime ocean frontage in downtown Long Beach. Other features of the hotel included an elaborate 500-seat dining room known as the "Hall of Galleons," roof garden, coffee shop, beauty shop, barber shop, Turkish bath, and "smart shops." The hotel catered to "surf bathers" with a special elevator that transported the bathers, after they had "donned their bathing suits in their rooms," to the Arcade level, from which there was an entrance to the beach.

One of the hotel's unusual features was the availability of radio broadcasts in each guest room. An October 1926 article in the Los Angeles Times described the "outstanding" in-room entertainment feature as follows:

Each room in the new hostelry has four radio jets, each connecting with the radio-receiving room in the tower. By plugging in on any of these four jets, programs from broadcasting stations are heard ... If there is a particular program on the air which a guest particularly desires to hear, it is only necessary to phone the receiving room and the operator will tune it in.

At its opening, the Breakers was available for both temporary guests and others who made it their permanent residence. The hotel was expected to "be the means of attracting thousands of people to Long Beach." 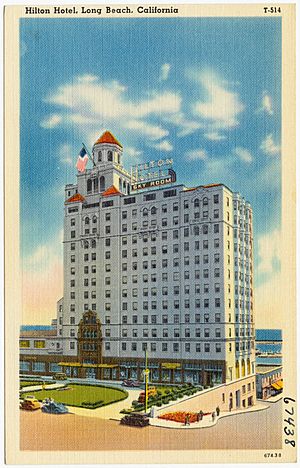 The hotel depicted on a postcard

Less than a year after its opening, the hotel was sold by Fred Dunn to an unnamed group of investors from Pasadena, Los Angeles and New York. The sale price in 1927 was reported to be $1,750,000. The new owners announced plans for extensive remodeling, including the closure of several dining rooms and conversion of the ballroom into a summer garden.

The onset of the Great Depression and the 1933 Long Beach earthquake pushed the Breakers into bankruptcy. The 1933 earthquake, which resulted in over 100 deaths, caused only minor damage to the Breakers, but the widespread destruction in Long Beach caused major damage to the city's tourist trade. The hotel served as the headquarters for the Red Cross relief efforts following the earthquake. In August 1934, the Los Angeles Times reported that the hotel had sustained a significant operating loss in 1933 and was delinquent on its real estate and personal properties taxes for the past three years.

In 1938, the hotel was purchased by Conrad Hilton at a reported cost of $150,000 and $35,000 in back taxes. Hilton turned the Breakers into the eighth hotel in the Hilton chain. Hilton spent at least $200,000 on renovations and converted the penthouse into the Sky Room.

In 1938, Hilton opened the Sky Room atop the hotel, and it became one of the most popular restaurants gathering spots in Southern California. Movie stars such as Clark Gable, Errol Flynn, Rita Hayworth, Cary Grant and John Wayne were said to have been customers at the Sky Room during the Hilton years. One customer recalled the Sky Room as follows: "It was a dating place, like the Brown Derby and Coconut Grove. It was the place to go."

During World War II, two pillboxes with gun-mountings were installed on the rooftop for harbor defense, and the Sky Room became the official Airwatch headquarters for Long Beach harbor. One of the pillboxes and gun mountings remained intact on the roof as late as 1991.

In 1947, Hilton sold the hotel to Frank Fishman, who renamed it the Wilton Hotel. The hotel remained the "Wilton" for 14 years. During the 1950s, the hotel changed ownership several times, and promises to spend hundreds of thousands of dollars to remodel the aging hotel were not kept. An episode of The Lone Wolf, "The Long Beach Story", features the Wilton.

In 1961, the hotel was purchased by Fred Miller. Miller was one of the founders of Flying Tigers Airlines and purchased US Airlines in 1951. After buying the Breakers in 1961, Miller renamed the hotel the Breakers International and spent $1.25 million refurbishing the property from top to bottom. Miller reportedly hoped to "recapture, for Long Beach, the beauty, dignity and service of the city's greatest hotel." However, even with Miller's efforts, he was not able to turn around the fortunes of the Breakers. In 24 months as owner of the hotel, Miller reported that he lost half of his net worth. In November 1963, Miller gave up and closed the hotel.

The Long Beach Press-Telegram pronounced the hotel "a dead behemoth on the beach." Others noted the hotel's over-reliance on convention business: "This hotel had to try to make 80 percent of its revenues from convention business. There is no rail service or air service to Long Beach, and the 20-minute run on the freeway to Los Angeles where the industry is hurts all the hotels." One commentator opined, "God and Conrad Hilton couldn't have saved this hotel." The hotel's head bellman, Paul Grantham, who had been employed at the hotel since 1928, blamed the "coming of the motels."

In January 1964, the hotel was sold at auction to pay off the hotel's creditors. Despite an appraised value of $4.3 million for the land and improvements, the property sold for $1.75 million. The high bidder, Long Beach realtor Harvey Miller, announced plans to convert the structure into a retirement hotel.

The hotel remained shuttered for nearly three years and was referred to as "the West Coast's largest pigeon roost."

The hotel remained closed for three years as plans to convert it into a retirement hotel stalled. In September 1966, the hotel re-opened as a combination permanent retirement hotel and transient hotel for overnight guests. By January 1967, the property was occupied 70% by permanent residents who had the option of an American plan at $175 per month including hotel conveniences and three meals a day, or a European plan at $115 a month without meals.

In 1975, the residential retirement hotel was refurbished again. The renovations included all new carpets, drapes, furnishings, automated elevators, and an updated phone system. The owners stated their intention to create the ultimate in retirement living for the senior citizens of Long Beach.

In 1978, New Breakers Hotel Company sold the property to Stoneridge Management Company for less than $3 million.

The new version of the Breakers opened with 242 guest rooms, including 20 suites, a restaurant and night club on the top floor, and a ballroom restored to its original 1920s decor. The Sky Room, which had been given a Polynesian theme by prior owners, was renovated in an Art Deco style. At the time of the re-opening, the Los Angeles Times wrote: "Its 60 years have been a roller-coaster ride of ups and downs, prosperity and penury, bright lights and gloomy emptiness. Just now, its direction is up."

The excitement about the Breakers' restoration was short-lived as the hotel failed to draw a sufficient number of guests to turn a profit. The hotel closed its doors again in January 1988.

In 1989, the Breakers, still vacant after its closure in 1988, was designated as a Long Beach Historical Landmark, requiring approval from the Cultural Heritage Commission before making any major changes in the building's appearance.

The property was purchased following its 1988 closure by Ocean Boulevard Associates, which spent $23 million on earthquake retrofitting and restoring its 1920s-style Romanesque architecture. The building re-opened in November 1990 as an "Assisted Living" Residence for senior citizens. As of October 1991, the Breakers had 38 residents with an average age of 84, paying rents starting at $1,000 a month, including three meals a day, housekeeping and local transportation. An in house Medical Staff provided medication administration and routine activities for those in need of leadership. The facility closed in March 2015 after state authorities revoked its license.

In 1997, the Sky Room, originally developed by Conrad Hilton in 1938, was restored and re-opened by the property's new owner Bernard Rosenson. Rosenson restored the Art Deco look of the Sky Room and redesigned it to focus on its 360-degree view. The new Sky Room offered an "ultra-retro menu" and music by a swing and jazz band called the Sky Room Orchestra.

In November 2017, Pacific6, a Long Beach based investment and development partnership, assembled by Long Beach businessman and philanthropist John Molina with partners Kevin Davis, Robert Gordon, Jon Heiman, Todd Lemmis and David Telling, purchased the building and announced their intentions to fully restore the Breakers and operate it as a 185 room luxury boutique hotel. The company plans to spend $60+ million on the renovation and the hotel is expected to reopen in 2021.

All content from Kiddle encyclopedia articles (including the article images and facts) can be freely used under Attribution-ShareAlike license, unless stated otherwise. Cite this article:
Breakers Hotel (Long Beach, California) Facts for Kids. Kiddle Encyclopedia.