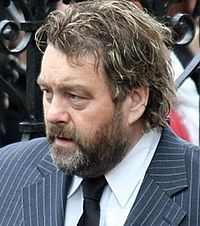 Brendan Grace (1 April 1951 – 11 July 2019) was an Irish comedian and singer. He was known for his comedy schoolboy character "Bottler", the role of Murphy in the 1995 movie Moondance, and his 1996 appearance in the Irish TV sitcom Father Ted as Father Fintan Stack. Grace was born in Dublin.

All content from Kiddle encyclopedia articles (including the article images and facts) can be freely used under Attribution-ShareAlike license, unless stated otherwise. Cite this article:
Brendan Grace Facts for Kids. Kiddle Encyclopedia.