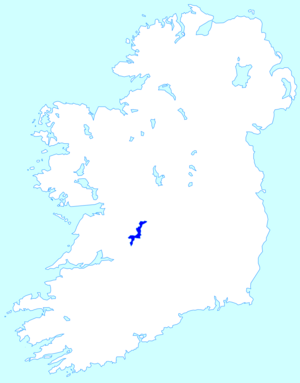 The location of Lough Derg in Ireland

Lough Derg, historically Lough Dergart (Irish: Loch Deirgeirt), is a freshwater lake in the Shannon River Basin, Ireland. It is the third-biggest on the island of Ireland (after Lough Neagh and Lough Corrib).

It is a long, narrow lake, with shores in counties Clare (south-west), Galway (north-west), and Tipperary (to the east). It is the southernmost of three large lakes on the River Shannon; the others being Lough Ree and Lough Allen. Towns and villages on Lough Derg include Portumna, Killaloe & Ballina, Dromineer, Terryglass, Mountshannon and Garrykennedy.

The lake's name evolved from the Irish Loch Deirgdheirc. This was one of the names of The Dagda, an Irish god, and literally means "red eye".

At its deepest, the lake is 36 metres deep and covers an area of 130 km² (50.2 sq miles). Close downstream from where Lough Derg empties into the Shannon are the falls of Doonass, the largest fall on the otherwise gently sloping river. Nearby is the location of the hydroelectric power plant at Ardnacrusha, which, when built in 1927 was the world's largest.

In the nineteenth century, Lough Derg was an important artery from the port at Limerick to Dublin through the canals in the midlands of Ireland. Navigable over its full 40 km length, Lough Derg is today popular with cruisers and other pleasure craft, as well as sailing and fishing. The University of Limerick have an activity centre by the lake, just north of Killaloe, where there are canoes, kayaks, windsurfing, sailing dingies, and other recreations.

Lough Derg is home to an RNLI Lifeboat which is based at Dromineer, the first inland station in Ireland. In June 2013, 35 people were brought to safety when a major rescue effort was undertaken after an international rowing event was hit by severe weather.

Dublin City Council published a plan in 2011 for a pipeline to supply up to 350 million litres of water a day from Lough Derg to Dublin city and region. In 2016 the Parteen Basin at the south of lough was chosen as the proposed site of extraction. Water would be pumped to a break pressure tank at Knockanacree near Cloughjordan in County Tipperary and gravity fed from there to Dublin.

A breeding pair of white-tailed eagles first nested on an island in Lough Derg in 2012. This marked a great success for the Irish reintroduction programme started in the summer of 2007.

Nitellopsis obtusa, an invasive alga in the family Characeae (stoneworts), was first recorded in Ireland in this lough in 2016.

The North-East Shore is listed as a Special Area of Conservation.

All content from Kiddle encyclopedia articles (including the article images and facts) can be freely used under Attribution-ShareAlike license, unless stated otherwise. Cite this article:
Lough Derg (Shannon) Facts for Kids. Kiddle Encyclopedia.