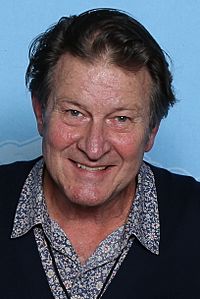 Peter Brett Cullen (born August 26, 1956) is an American actor. He was born in Houston, Texas. Cullen played Dan Fixx in the 1980s CBS drama Falcon Crest for two seasons (1986–88). In 2009, he had a recurring role in the ABC Family television series Make It or Break It.

In 2011, he played stepfather to Selena Gomez's character in the romantic comedy Monte Carlo, and in 2012, appeared as a congressman in the Batman movie The Dark Knight Rises. In 2019, Cullen starred as Thomas Wayne in the 2019 movie Joker.

All content from Kiddle encyclopedia articles (including the article images and facts) can be freely used under Attribution-ShareAlike license, unless stated otherwise. Cite this article:
Brett Cullen Facts for Kids. Kiddle Encyclopedia.