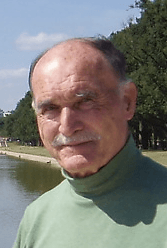 Brian Tierney DFC & Bar (May 7, 1922 – November 30, 2019) was an English historian and a medievalist. He was a member of the faculty of the Catholic University of America for eight years until becoming professor of medieval history at Cornell University in 1959, becoming the Goldwin Smith Professor of Medieval History in 1969. He was the first Bowmar Professor of Humanistic Studies in 1977.

Tierney was born in Scunthorpe, North Lincolnshire. He died on November 30, 2019 at his home in Ithaca, New York at the age of 97.

All content from Kiddle encyclopedia articles (including the article images and facts) can be freely used under Attribution-ShareAlike license, unless stated otherwise. Cite this article:
Brian Tierney (medievalist) Facts for Kids. Kiddle Encyclopedia.