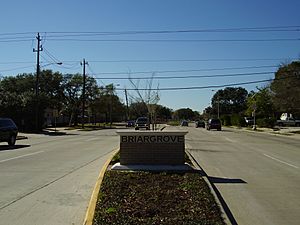 Briargrove is a neighborhood in Houston, Texas, United States, near Uptown Houston.

Briargrove was established in the 1950s with one-story ranch homes built in the 1950s and 1960s. Deed restrictions in the neighborhood were modified in 1986 to allow for 1+1⁄2-story and two-story homes. Afterwards some of the older ranch homes were torn down and replaced with newer 2-story homes.

The Briargrove Park Center is located in Briargrove. The Houston Business Journal said that the park was "[l]ong a favorite with families". By 2003 several improvements had been added to the pool, playground, tennis, and clubhouse facilities, including a large covered pavilion, fences, new toilet facilities, and sidewalks.

Many residents jog and stroll at another park, described by the Business Journal as "a second nature preserve-like park". The park has its own newsletter, the "Voice of Briargrove Park."

The city of Houston operates the Tanglewood Park at 5801 Woodway and the Grady Park at 1700 Yorktown.

The closest YMCA to Briargrove is the Post Oak YMCA. 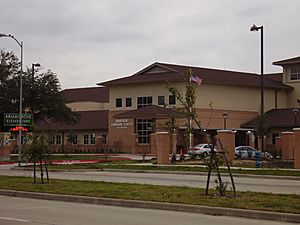 Briargrove's public schools are operated by Houston ISD. The community is within Trustee District VII, represented by Anne Sung. 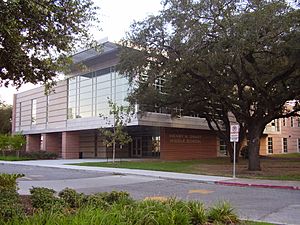 The current 93,500-square-foot (8,690 m2) Briargrove Elementary School, with a capacity for about 850 students and designed by FKP Architects and built by Heering International Inc., had a cost of about $16 million. The campus divides multiple classes into "pods". The driveway and 60 parking spaces are to the rear of the campus.

Residents of the Briargrove Elementary School attendance zone may apply for the Briarmeadow Charter School. Mark White Elementary School is scheduled to open in August 2016. Residents of the Briargrove Elementary zone, along with those of the Pilgrim, Piney Point, and Emerson zones, will be allowed to apply to this school. Even though several wealthier neighborhoods such as Tanglewood and Briargrove are primarily zoned to Wisdom, As of 2010[update] parents there prefer to send their children to Lamar, Westside, private high schools, or charter high schools.

The T.H. Rogers School, an alternative K-12 school for gifted and talented students, deaf students, and multiply impaired students, is nearby Briargrove. In 1982 T. H. Rogers, which previously served as a neighborhood middle school, was converted into a magnet school due to low enrollment. Uptown residents were rezoned to Revere Middle School, but there were complaints from neighborhood parents that stated that Revere was too far; this resulted in the re-opening of Grady as a middle school in 1992.

St. Michael School, a Roman Catholic K-8 school that is a part of the Archdiocese of Galveston-Houston, is in the area.

Al-Hadi School of Accelerative Learning, a private K-12 Islamic school, is in the area.

The Houston Public Library Jungman Branch is in the area.

All content from Kiddle encyclopedia articles (including the article images and facts) can be freely used under Attribution-ShareAlike license, unless stated otherwise. Cite this article:
Briargrove, Houston Facts for Kids. Kiddle Encyclopedia.