Brickyard Cove is a body of water in the Brickyard Cove neighborhood of the Point Richmond area of Richmond, California. The cove is situated between the Harbor Channel, a deepwater shipping channel that connects the San Francisco Bay with the Port of Richmond and the mainland. The cove is located between Point Potrero and Ferry Point. A marina is located in the cove and the Red Oak Victory part of Rosie the Riveter/World War II Homefront National Historic Park is docked in the western end of the cove. 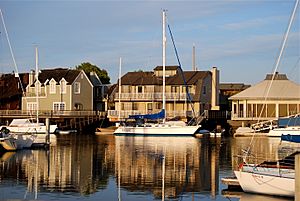 The marina at Brickyard Cove

All content from Kiddle encyclopedia articles (including the article images and facts) can be freely used under Attribution-ShareAlike license, unless stated otherwise. Cite this article:
Brickyard Cove Facts for Kids. Kiddle Encyclopedia.