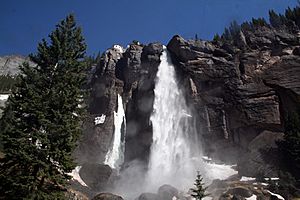 Bridal Veil Falls, taken from the base.

Bridal Veil Falls is a 365-foot (111 m) waterfall at the end of the box canyon overlooking Telluride, Colorado. Hiking and off-road trails pass by the falls and it has a hydroelectric power plant at its top. In winter the frozen shape of the falls forms an imposing challenge to intrepid ice climbers.

Bridal Veil Falls are a two-pronged waterfall. The area around Bridal Veil Falls is subject to avalanche and controlled shelling to create controlled slides is an event popular with spectators and photographers. Reaching the top of the falls in winter can be a precarious venture, even for the experienced family that lives there.

A hiking trail continues on past the falls to mountain meadows and mountain lakes above 10,000 feet (3,000 m).

In 1978, Jeff Lowe and Mike Wiess became the first to summit the falls, the effort having been broadcast on ABC’s Wide World of Sports.

The falls were opened briefly in the 1990s to ice climbers, but the area is private property so climbing has been legally prohibited since. Referred to as a "mega classic" and "the most difficult waterfall ice climb in North America", some climbers have trespassed to take a crack at the imposing and dangerous climb, but a land purchase proposal and an insurance deal may change the situation. Climbers were excited by the proposal in 2008 that would reopen the falls to climbers. 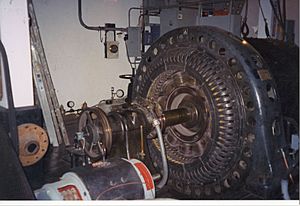 A hydro-electric alternating current power plant, the Smuggler-Union Hydroelectric Power Plant built in 1907, sits on top of the falls, originally used to power the Smuggler-Union Mine. It was eventually owned by the Idarado Mining Company who decommissioned it in 1953. It was leased from Idarado by local resident Eric Jacobson in 1988 who restored the power house to operation in 1991 and lived in the residence with his family until 2010 when he gave up the lease. The Idarado Mining Company now owns and operates the power plant and sells the power. The power generated provides about 25 percent of Telluride's demand for electricity and the plant still contains its original 2300 volt Westinghouse Electric AC generator, one of the oldest AC generators still in operation. In 1979 it was listed on the National Register of Historic Places.

All content from Kiddle encyclopedia articles (including the article images and facts) can be freely used under Attribution-ShareAlike license, unless stated otherwise. Cite this article:
Bridal Veil Falls (Telluride) Facts for Kids. Kiddle Encyclopedia.