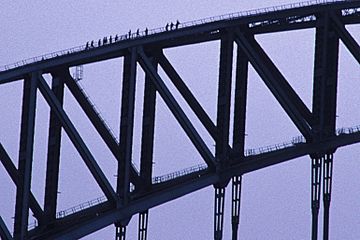 Climbers on the Sydney Harbour Bridge

The company guides guests on a climb on the Sydney Harbour Bridge. Numerous visitors from various countries and territories have climbed the southern half of the bridge.

Four different types of climbs are offered, as of December 2017. The BridgeClimb, which was initially the only option, takes guests to the top of the bridge along the upper arch in a round-trip that takes over three hours, including preparation time. BridgeClimb Express guides guests to the interior of the steel bridge and then to the top in just over 2 hours. BridgeClimb Sampler was introduced in 2014, for those who are short on time or concerned about heights: in an hour and a half, climbers ascend the inner arch to a vantage point halfway to the top. Finally, the Mandarin Climb, introduced in January 2012, follows the standard BridgeClimb or BridgeClimb Express route and is led by a Mandarin-speaking guide. Mandarin Climbs are available daily at 10 am and 3 pm. The different route options are available in time-of-day variants: dawn, day, twilight and night.

BridgeClimb also offers special climbs for some of Sydney's events, like the Vivid Climb, the Ferrython Climb on Australia Day, or the Anzac Day Dawn Climb.

There have been over 4,000 proposals at the summit of the bridge and couples also have the option to get married on the bridge, 134 m (440 ft) above Sydney Harbour. The experience has also attracted many famous actors, musicians and members of royalty, including cast members of The Biggest Loser, Kylie Minogue, Zac Efron, Nicole Kidman, Robert De Niro, Prince Harry and more recently Oprah Winfrey and Zoolander (Ben Stiller).

Anyone over the age of eight years and in good health can climb. There is no maximum age, with the oldest climber being 100 years old.

The concept of BridgeClimb was born in 1989 when BridgeClimb's Founder and Chairman, Paul Cave, helped conduct a Young Presidents Organisation World Congress in Sydney, which included a climb over the Sydney Harbour Bridge. Following this experience, Cave decided to make climbing the Sydney Harbour Bridge a permanent attraction. This led to many years of dealing with state and local government bodies, community groups and many experts on safety, logistics, media, heritage and conservation issues. After nearly ten years of research and development, BridgeClimb Sydney was officially launched on 1 October 1998. At that time, BridgeClimb was the first tourism operator on a bridge anywhere in the world.

The Bridge exhibition houses the stories of the Sydney Harbour Bridge through exhibits and interactive displays. This includes the stories of the engineers, designers, skilled tradesmen and labourers and the 16 men that lost their lives during its construction. The exhibition also documents the events that took place and the people that participated in the Sydney Harbour Bridge's famous opening ceremony in 1932.

The Pylon Lookout is also managed by BridgeClimb Sydney. The Pylon houses three levels of exhibits and climbers are provided with a free pass to the Pylon Lookout when checking in for their climb.

On 1 January 2018 Hugh Jackman climbed the Sydney Harbour Bridge with family and friends. Jackman was guided to the top by Climb Leader Adam Terry. In October 2018 Prince Harry climbed the bridge in order to unveil the Invictus Games flag and mark the opening of the Games in Sydney.

In June 2018 the franchise was awarded to the proprietors of Katoomba Scenic World for 20 years following a formal tender process.

The company has received numerous industry awards and accolades including a world record for number of flags flown on a bridge recognised by Guinness World Records.

All content from Kiddle encyclopedia articles (including the article images and facts) can be freely used under Attribution-ShareAlike license, unless stated otherwise. Cite this article:
BridgeClimb Sydney Facts for Kids. Kiddle Encyclopedia.