The Bridge Avenue Historic District is located in a residential neighborhood on the east side of Davenport, Iowa, United States. It has been listed on the National Register of Historic Places since 1983. The historic district stretches from River Drive along the Mississippi River up a bluff to East Ninth Street, which is near the top of the hill. 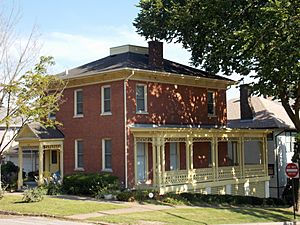 The historic district is made up of fourteen houses on the southern end of Bridge Avenue. The street itself rises steeply to the north from River Drive. It is located along the east side of a ravine that separates it from the St. Katherine's Historic District on the west. To the north and west is the LeClaire Reserve, a largely residential area built on property that had belonged to city founder Antoine LeClaire. A residential neighborhood to the east that dates from the early 20th Century includes the Prospect Park Historic District. The houses along this section of Bridge Avenue were largely built from the 1870s to 1910. The oldest house, however, was built in 1860. Ten of the houses are on the west side of the street and four are on the east side, which also includes the larger property of the Ambrose Fulton House. All but two of the houses are of frame construction. The two noncontributing elements in the district are a modern apartment building (730 Bridge) and a parking lot located at the foot of Bridge Avenue and Oneida Street. 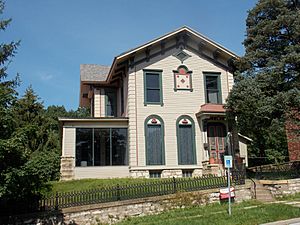 The most prominent of the residences was built by Ambrose Fulton, who was significant to Davenport's early settlement and its industrial history. He was an early and aggressive promoter of the new town. Fulton was involved in multiple industries including flour mills, railroads, river commerce, land speculation, and retail commerce. Of the four oldest houses in the district, three are Italianate, including the Fulton House, and one is Second Empire. Three of the four houses feature quoined corners similar to that of the Fulton residence even though they are built of wood. Quoining is rare in Davenport's residential architecture and its noticeable incidence here suggest others were emulating Fulton. Besides Fulton, three other prominent members of the Davenport community built houses on Bridge Avenue. John B. Carmichael dealt in books, stationary, and wallpaper; Josiah Dow owned a grain mill; and John Forrest was a local politician and commercial developer. Forrest is also responsible for the Forrest Block downtown. Josiah's wife Maggie built a duplex on Bridge Avenue after her husband's death.

Nine of the more significant houses include: 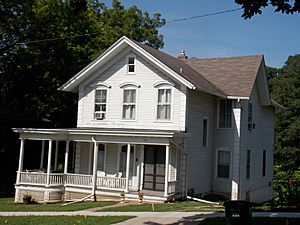 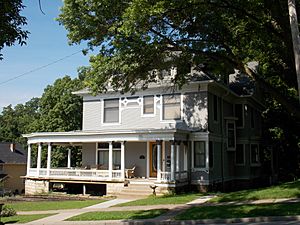 All content from Kiddle encyclopedia articles (including the article images and facts) can be freely used under Attribution-ShareAlike license, unless stated otherwise. Cite this article:
Bridge Avenue Historic District Facts for Kids. Kiddle Encyclopedia.