The Brighton Wheel, also known during its planning and construction phase as the Brighton O and the Wheel of Excellence, was a transportable Ferris wheel installation which operated from October 2011 until May 2016 on the seafront in Brighton, part of the English city of Brighton and Hove. Situated below the East Cliff near Brighton Pier and built with private funding, its promoters anticipated that several hundred thousand visitors per year would experience the 12-minute ride. The wheel's location in a conservation area with many residential buildings proved controversial.

The East Cliff, rising eastwards from Old Steine—the original fashionable centre of Brighton in the 18th century—was developed as a prestigious residential area from the early 19th century. Madeira Drive was built at the base of the cliff in 1823 and was extended to form a long, wide carriageway in 1872 and 1895. Early tourist attractions in the area included The Royal Suspension Chain Pier (1823), Brighton Aquarium (1872), Volk's Electric Railway (1883) and the Palace Pier (1899; now styled Brighton Palace Pier). About 150 acres (61 ha) of the East Cliff area was designated a conservation area in 1973—one of 34 conservation areas in Brighton and Hove.

Paramount Attractions, a local company, first proposed the construction of a Ferris wheel on Brighton seafront in 2009. They applied for a temporary planning order to erect a 60-metre (200 ft) wheel with 32 gondolas on the beach near the ruined West Pier. It would have stood opposite the Metropole Hotel very close to the proposed i360, a 600-foot (180 m) observation tower that had received planning permission in 2006 and on which some preliminary construction work had begun. The i360's developers objected to the planning application, as did the Metropole Hotel, conservationists and local residents—although there was also "vocal support" for Paramount's plan. The company withdrew the planning application in January 2010, just before Brighton and Hove City Council's expected rejection of it. At this stage, the name "Brighton O" was used for the scheme.

In March 2011, Paramount Attractions stated that they would submit a new application for a wheel of a similar size but with a different design—the proposed wheel near the West Pier would have had no spokes. The company chose a different site as well, on Madeira Drive, about 360 feet (110 m) east of Brighton Pier. The expected cost was £6 million, for which Paramount said they had secured funding. The application was submitted by the end of March, and an objection was soon received from The Regency Society. The conservation group, founded in 1945 by a group of architects, MPs and other prominent residents, stated that the wheel would affect the residential area of the East Cliff because houses would be overlooked, sea views would be blocked and a major tourist attraction was unsuitable for what was a "relatively quiet area" of the seafront. After taking this and other statements of support and objection into account, Brighton and Hove City Council granted temporary planning permission until May 2016 during a meeting on 27 April 2011. The council granted permission for the wheel to be open between 10:00 am and midnight each day, but Paramount subsequently changed the closing time to 11:00 pm. The structure also required a Highway Licence before it could be built, which was granted on 25 August 2011. 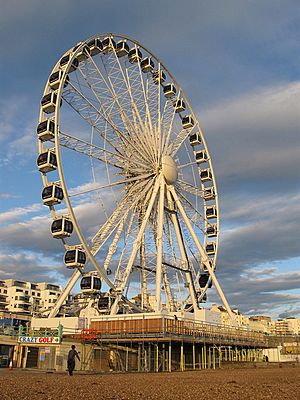 The Brighton Wheel nearing completion on 7 October 2011, with the Van Alen Building in the background

The wheel was manufactured in Germany and was transported to South Africa in 2010, where it served as a tourist attraction during the 2010 FIFA World Cup. It was shipped to England in September 2011, a month after work began on building its foundations on Madeira Drive, at a location known as Dalton's Bastion. Some railings of historic interest had to be taken out; the Regency Society stated in October 2011 that they had asked the council to keep them in good condition and re-erect them after the wheel was dismantled. The railings are part of a Grade II-listed length running along Marine Parade, built in 1880 of moulded cast iron and teak.

Installation began in September 2011, and after a period of testing, it opened to the public on 24 October 2011—the first day of the school half term. Paramount Attractions stated they hoped to attract 250,000 visitors to the wheel per year during its five-year existence.

There were 35 standard gondolas, each able to carry up to six adults and two children, and one VIP gondola able to carry up to four people, giving a maximum capacity of 284 (although the typical ridership at any one time was expected to be 200). As demonstrated by its move from South Africa to England, the structure is fully transportable and its operator Paramount Attractions claimed it could be disassembled and removed in two weeks. Commentary was available on the views and buildings visible during the ride. Opening hours were 10:00 am to 11:00 pm all year, and the wheel was lit at night; the extent of the illumination was reduced from that proposed in the planning application, which included lights on the supporting struts and some flashing lights.

All content from Kiddle encyclopedia articles (including the article images and facts) can be freely used under Attribution-ShareAlike license, unless stated otherwise. Cite this article:
Brighton Wheel Facts for Kids. Kiddle Encyclopedia.