British Airways i360 facts for kids

British Airways i360 is a 162 m (531 ft) observation tower on the seafront of Brighton, East Sussex, England at the landward end of the remains of the West Pier. The tower opened on 4 August 2016. From the fully enclosed viewing pod, visitors experience 360-degree views across Brighton, the South Downs and the English Channel.

British Airways i360 was designed, engineered, manufactured and promoted by the team responsible for the London Eye. The attraction cost £46 million, with £36 million being funded by a Public Works Loan Board (PWLB) loan through Brighton and Hove city council.

Formerly known as the "Brighton i360", the project aimed to attract 739,000 paying customers every year. The owner of the site, the West Pier Trust, hoped in 2014 that a successful i360 would lead to the rebuilding of the historic West Pier.

Original design artwork of the tower

British Airways i360 was designed by the architectural company Marks Barfield, which also designed the London Eye. The building was conceived as a "vertical pier". The tower is located at the shore end of the ruined West Pier, and the design recreated the original Italianate ticket booths of the West Pier, placed on either side of the entrance, serving as ticket office and tea room. The design also includes a beachfront building that allows access to the tower and houses a brasserie, café and gift shop.

The tower is designed as a 162 m (531 ft) tall needle structure with an ascending and descending circular viewing platform with capacity for 200 people.

The tower's initial design had included a wind turbine at the top and rainwater harvesting facilities, to help mitigate the attraction's environmental impact. In October 2015 the developers dropped both these proposals, claiming that the turbine would have stopped the tower's damping system from working and be susceptible to wind damage, and that the water would be "too dirty to be useable". 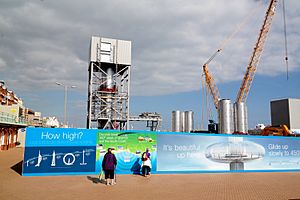 Under construction behind hoarding, June 2015

Plans were submitted in June 2006 and were approved by Brighton and Hove City Council later that year with construction projected to start in 2007. Following delays of around 15 months, the off-site construction of the sections of the tower began in 2008 in the Netherlands, and work on reconstructing the arches beneath and to the east of the pier to allow the tower construction began in November 2012. Work on the tower itself began in May 2014, with the attraction being scheduled to open in 2016.

The Dutch steelwork specialist Hollandia prefabricated the cylindrical steel sections of the tower, known by the team as cans. The column is 4 m (13 ft) in diameter, and with a height-to-diameter ratio of 40:1, it is the world's slenderest tall tower.

The glass passenger pod was designed and built by cable car specialists POMA, which also built the London Eye capsules. The passenger pod is 18 m (59 ft) in diameter and holds up to 200 people. The viewing pod travels from street level to a height of 138 m (453 feet) before returning to beach level. The pod provides a 360-degree view through curved glass and is heated and air-conditioned, with full wheelchair accessibility and bench seating. It also contains a bar and restaurant in the base building.

English Heritage felt that the 2006 plan would "provide an outstanding feature on the seafront, and a worthy companion to any successor to the West Pier". In a statement, the West Pier Trust hoped that the project would "regenerate a key blighted city site and send out a loud message that Brighton is open for business".

The project was initially intended to be entirely privately funded. The architect, Marks Barfield, sold its stake in the London Eye and found financial backers to build the tower. Following the financial crisis of 2007–08, Marks Barfield approached Brighton and Hove Council for a loan. The council initially agreed to support the build with a £14.8 million loan, but this was raised after an unnamed private equity investor told the architects it could no longer proceed and withdrew its planned £15 million contribution in 2012. In March 2014, the project was expected to cost £46 million, with Brighton and Hove Council lending £36.2 million from the Public Works Loan Board and architects Marks Barfield contributing £6 million. The deal included Marks Barfield paying £1m annual profit to the council.

The £36.2 million loan was agreed at a Special Policy & Resources Committee in March 2014, the council agreeing to more than replace the lost investment capital and to again borrow from the Public Works Loan Board to effect the new bailout. The Coast to Capital LEP loan of £3 million was raised to £4 million. The West Pier Trust has suggested the project "will cost the taxpayer nothing", but some residents expressed concerns that any repayment risk would be borne by the residents of Brighton & Hove. The council has said that if the loan were not repaid, it would have the option to take over the attraction, find another operator or sell it.

In June 2018, disappointing visitor numbers forced the owners to ask Brighton and Hove City Council and the LEP for better loan repayment terms. Brighton and Hove News reported that "in the first full year, from August 2016, the i360 had just over 500,000 visitors, significantly fewer than the 800,000 predicted." The shortfall in visitors was "blamed on poor weather and the unreliable train service to and from London." 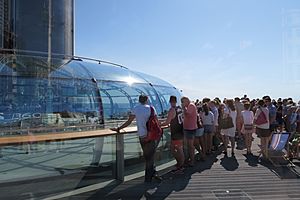 Passengers preparing to enter the i360 pod

British Airways i360 opened on 4 August 2016. A scheduled fireworks display was delayed for a week due to a storm off the coast. The operator's website states that "flights" depart every 30 minutes, with rides lasting approximately 25 minutes.

The pod was vandalised within the first few weeks of operation, with a foot-long crack in the glass being repaired after it was noticed by customers. A spokeswoman described the damage as "aesthetic" that held no risk to customers' safety. 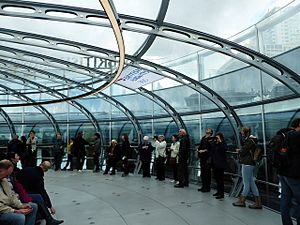 Interior of the i360 pod

The i360 experienced operational issues a month after opening. On two occasions in September 2016 the i360's pod became stuck. A "slight technical fault" resulted in passengers being stranded 9 m (30 ft) above ground for a time. Just days later 200 visitors were trapped at ground level for over an hour. The tower was closed for a day for checks. A broken cable in February 2017 caused passengers to become stuck part way through the ride for two hours, and the i360 was closed over the weekend for repairs. In March 2017, the tower was closed due to a temporary fault; the third time the attraction has been closed since it opened. 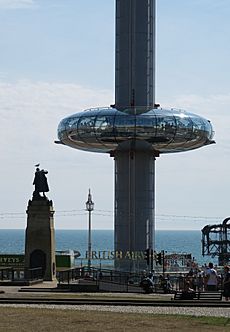 View of i360 from Regency Square. Ruins of the West Pier just visible on the right

During the planning and construction of the tower, a number of local residents and groups campaigned against the building of the tower and the public loan, with a petition gaining 1,449 signatures, including those of architects Paul Zara, of Conran and Partners, and Paul Nicholson, of Chalk Architecture; Simon Fanshawe, the writer and broadcaster, and Malcolm Dawes, chairman of the Brighton Society. Zara has since become a supporter of the i360, declaring, "We should embrace it."

Selma Montford of the Brighton Society, which aims to conserve and improve the city's amenities, described the i360 as a "horrendous thing in the sky" which would belittle nearby Regency Square. She said that she did not believe it would achieve the predicted visitor figures. Writing in The Independent on the day following the launch, Janet Street-Porter criticised the i360, comparing it unfavourably with Brighton's "egalitarian" West Pier.

During promotions at the time of the tower's opening, its owners claimed that the i360 was "the world's tallest moving observation tower". The Guinness World Record title was later revoked after Guinness discovered that the 500-foot (150 m) Top o'Texas Tower, which opened in 2013, had a moving platform which reached a greater height. The Advertising Standards Authority subsequently ordered British Airways to cease advertising the i360 in this way.

All content from Kiddle encyclopedia articles (including the article images and facts) can be freely used under Attribution-ShareAlike license, unless stated otherwise. Cite this article:
British Airways i360 Facts for Kids. Kiddle Encyclopedia.