Wines which are neither labelled VQA or Wine of Distinction, and from certain producers (given special rights under the 1988 Canada-United States Free Trade Agreement), can use foreign bulk wine to produce a third category of wine which is labelled as Cellared in Canada. Significant parts of the wine industry, and respected wine writers in Canada and abroad, are quite concerned about this practice.

There are several classifications of winery, represented by numerous organizations. The smallest are known as "farmgate" wineries. "Land" wineries are mid-sized operations.

Although Canada has a reputation for having a cold climate, much of the British Columbia Interior has a mild or dry climate which is ideal for growing grapes. Within the Interior, the Okanagan Valley in particular is known for both the high quality of its wines, and for its increasing number of respected wineries, smaller pockets such as the Creston Valley have been emerging of late, with very high quality first epoch vitis vinifera varietals. On the Coast, the Cowichan Valley and Saanich Peninsula on Vancouver Island, the Gulf Islands, and the Fraser Valley in the Lower Mainland are also wine-growing regions. Experimentation with vines has also happened in various other southerly areas of the province. 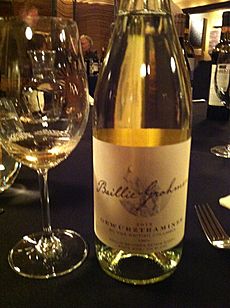 A Gewürztraminer from British Columbia.

The most prominent varieties of grapes grown in British Columbia are:

For red wine and rose production:

Based on their unique terroir, there are five official viticultural areas in the province which are recognized by the VQA. Wines bearing the name of a viticultural area are produced from a minimum of 95 percent of the grapes grown in the designated area.

There are also emerging regions:

Association of BC Winegrowers

The Association of British Columbia Winegrowers (ABCW) is an association of winemakers located in British Columbia. Most of the member wineries are small lot producers (less than 5,000 cases produced each year), family-owned and -operated. Their wines are all made from 100% BC-grown fruit. The ABCW's 57 members account for over 70% of the province's wineries.

All content from Kiddle encyclopedia articles (including the article images and facts) can be freely used under Attribution-ShareAlike license, unless stated otherwise. Cite this article:
British Columbia wine Facts for Kids. Kiddle Encyclopedia.