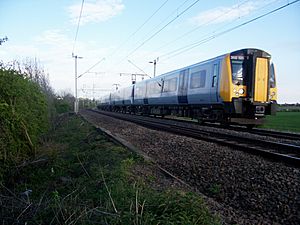 350120 passing Kingsthorpe, just north of Northampton station, on the 22 April 2007, with a Birmingham bound service

The British Rail Class 350 "Desiro" is class of electrical multiple unit built by Siemens AG from 2004- present. Thirty of these units, known as Class 350/1s, were built for use by Central Trains and Silverlink on regional express services and Central Citylink services on the southern section of the West Coast Main Line. A further 37 units known as Class 350/2s are currently being delivered to the UK for London Midland. The "Desiro" family also includes units of Classes 185, 360, 444 and 450. This train is nearly identical to the 450, as it was originated from that.

All content from Kiddle encyclopedia articles (including the article images and facts) can be freely used under Attribution-ShareAlike license, unless stated otherwise. Cite this article:
British Rail Class 350 Facts for Kids. Kiddle Encyclopedia.