Desiro is the brand name for a design of modular train manufactured by Siemens of Germany.

The Desiro can be made as a diesel or electric multiple unit (DMU or EMU). It is normally made as two and three-car trainsets. Although there are many differences between single trains, the basic body design is the same. These trains are mostly used for regional services, and belong to a new generation of light, modular trains which have become common in many European countries. They are sometimes thought as light regional railcars. They are mostly cheap to make and work. Their fast acceleration makes them good for services with short intervals between stations. However, they are sometimes complained by people for their poor passenger comfort.

In Austria, the ÖBB (Austrian Federal Railways) is right now using about 60 diesel-powered Desiro trains called ÖBB 5022. These are based on the Class 642 used by Deutsche Bahn, but have added more safety stuff.

In 2005 and 2006, in Bulgaria, the Bulgarian State Railways begin working Desiro trains as part of a €67-million deal with Siemens AG for a total of 25 Diesel multiple units. As of 22 March 2006, 16 trains had been delivered, with many of them working on the Sofia-Kyustendil-Sofia line. Another €117-million deal for 25 EMUs has also been signed with Siemens AG. The EMUs were fitted out in Varna, where BDŽ and Siemens AG are thinking about making a joint venture company. The EMUs are classes 30 and 31 and are servicing traffic in the Sofia and Plovdiv areas. 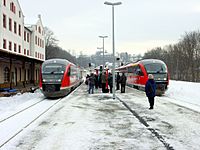 Germany's Deutsche Bahn first showed two-car Desiro DMUs for local services in 2000. With a top speed of 120 km/h, these Class 642 units are mostly used on branch lines and regional lines. Besides the 234 units bought by DB until 2007, many private German rail companies are also using Desiro DMUs.

The Class 642 has two MAN diesel engines with an output of 275 or 315 kW each and hydro-mechanical transmission with retarders. It normally has 100 seats. When linked together with Scharfenberg couplers, up to three trainsets can be worked together. The Desiros are quite popular with most passengers, thanks to their good acceleration. Because they have often replaced push/pull trains, their shorter journey times, such as on the Müglitzbahn, have made greater passenger numbers.

At first, DB was going to work together modern DMUs bought from different makers, but because of software trouble, this proved to be impossible. Therefore the Class 642 can only be mechanically coupled with other DMUs like the Class 643.

Right now in Hungary, 31 diesel Desiros are in service with MÁV (counting 8 units from Greece), mostly as suburban trains on the secondary line between Budapest-Esztergom and Budapest - Lajosmizse and as an InterCity between Budapest and Baja. On weekends, the units also used as top inter-city trains from Budapest to Baja and Sátoraljaújhely and as fast trains from Budapest to Tapolca. During the summer months (when fewer units are used on the Budapest suburban routes) Desiros appear on some local train diagrams on the norther shore of the Lake Balaton.

These EMUs have a maximum commercial speed of 160 km/h.

Căile Ferate Române (CFR), Romania's national railway worker, is one of the largest users of the Siemens Desiro trainsets. CFR, which is right now undergoing modernisation, has bought many Desiro trainsets and uses them for all types of train: "Regio", "InterRegio" and "InterCity" inter-city services, but mostly on its "InterRegio" express trains. There was some criticism of the use of Desiros for CFR's long-distance services because they were thought to be uncomfortable. CFR has recently refitted them, and is now using Desiros mostly on its medium and short-distance routes.

In December 2009 Russian Railways ordered 38 Desiros for delivery in 2013 for use during the 2014 Winter Olympics in Sochi, with an option for a further 16 which would be mostly made in Russia. 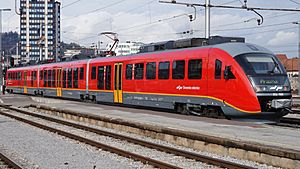 SŽ series 312 at the Ljubljana station

Slovenian Railways works electric Desiro units that are made as DESIRO EMG 312 SR 31E. They are used as commuter stopping trains mostly on connections to and between Ljubljana and Maribor on the following lines:

SBB-CFF-FFS works double-decker (bilevel cars) EMU's. They are designated as class SBB RABe 514. They are used as commuter trains in Zürich, where 61 four-car sets have been working since 2006.

Nine 25 kV AC Desiro UK EMUs based on the Heathrow Connect Class 360/2 will be used for the Suvarnabhumi Airport Link which is right now under running test from the locomotive shop in Asoke to Suvarnabhumi Station under the airport.

All content from Kiddle encyclopedia articles (including the article images and facts) can be freely used under Attribution-ShareAlike license, unless stated otherwise. Cite this article:
Desiro Facts for Kids. Kiddle Encyclopedia.