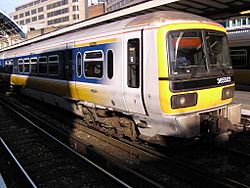 Class 365, no. 365502 at London Victoria on 18th March 2003. This unit is pictured with the original front end cab design, and is painted in Connex South Eastern "Networker" livery. This unit was then transferred to WAGN and then to First Capital Connect. It has since received cab modifications. 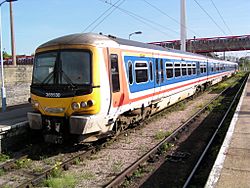 Class 365, No. 365530 arriving at Cambridge on 15th May 2004, with a service from King's Lynn. This unit is operated by First Capital Connect and has a modified front end with cab air conditioning. It is shown still painted in obsolete Network SouthEast livery.

The British Rail Class 365 "Networker Express" are dual-voltage (25kV AC and 750V DC) electric multiple units built by ABB at York from 1994-95. These were the last units to be built at York works before it closed. All Class 365 units in service have now received front end cab modifications to equip them with cab air conditioning.

All content from Kiddle encyclopedia articles (including the article images and facts) can be freely used under Attribution-ShareAlike license, unless stated otherwise. Cite this article:
British Rail Class 365 Facts for Kids. Kiddle Encyclopedia.