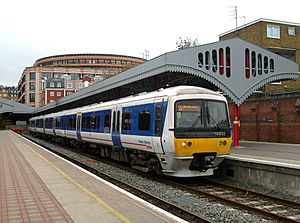 A 165 in Chiltern livery

The Networker is a family of trains which operate on the UK railway system. They were built in the late 1980s and early 1990s by BREL, which later became ABB. The trains were built for the Network SouthEast sector of British Rail. They are all multiple unit trains.

All content from Kiddle encyclopedia articles (including the article images and facts) can be freely used under Attribution-ShareAlike license, unless stated otherwise. Cite this article:
Networker (train) Facts for Kids. Kiddle Encyclopedia.