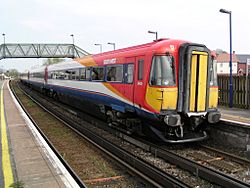 442402 "County of Hampshire" at Wool on 16 April 2004, with a South West Trains service from London Waterloo to Weymouth. 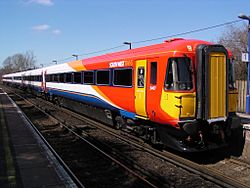 442407 "Thomas Hardy" at Moreton on 10 April 2006. This unit carries the revised South West Trains livery with differently coloured doors that conforms with the Disability Discrimination Act.

The British Rail Class 442 Wessex Electric (or 5WES) electrical multiple units, were introduced in 1988 on the South Western Main Line from London Waterloo to Southampton Central, Bournemouth, Poole and Weymouth. Twenty-four of these 5-car units were built between 1988-89 by BREL at their Derby works. Their introduction coincided with the completion of electrification from Bournemouth to Weymouth. The entire fleet was operated by South West Trains up until February 2007, when the Class 442 services were replaced.

All content from Kiddle encyclopedia articles (including the article images and facts) can be freely used under Attribution-ShareAlike license, unless stated otherwise. Cite this article:
British Rail Class 442 Facts for Kids. Kiddle Encyclopedia.