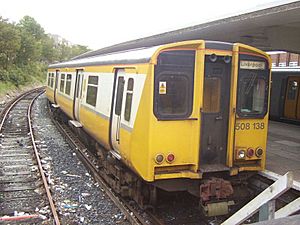 508138 bearing the 'Revised' livery, one of six 508s to receive this colourful variant. 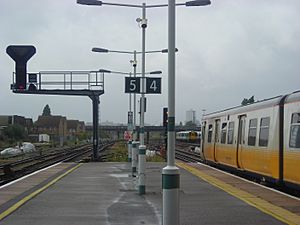 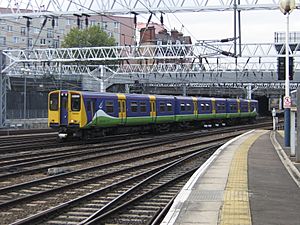 508301 arrives at London Euston in October 2007, one month before becoming part of the London Overground fleet. 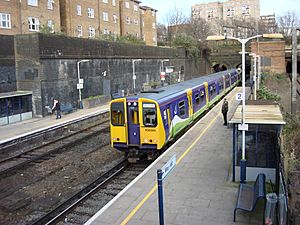 A Silverlink 508 at South Hampstead.

The British Rail Class 508 electric multiple units ("EMUs") were built by BREL at York works in 1979-80. They were the fourth variety of BR's then-standard 1972 design for suburban EMUs, eventually encompassing 755 vehicles and five classes (313/314/315/507/508). They have mostly worked on the Merseyrail network since 1983, and continue to do so, now refurbished by Alstom's Eastleigh Works.

All content from Kiddle encyclopedia articles (including the article images and facts) can be freely used under Attribution-ShareAlike license, unless stated otherwise. Cite this article:
British Rail Class 508 Facts for Kids. Kiddle Encyclopedia.