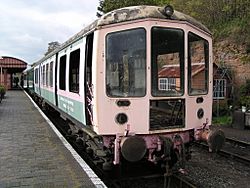 Derby Lightweight trailer no. 975008 (79612) on display at Bewdley on the Severn Valley Railway on 15th October 2004, as part of the Railcar 50 event. This vehicle has yet to be restored to original condition, and is preserved at the Midland Railway Centre.

The British Rail Derby Lightweight diesel multiple units, were the first such trains to be built en-masse for British Railways. The units were built at BR's Derby Works from 1954 to 1955. The units were built in various formations, including two single car units, 12 power-twin 2-car units, 84 power-trailer 2-car units, and four 4-car units. Contemporaneous with these units was the unique Battery Electric Multiple Unit.

All content from Kiddle encyclopedia articles (including the article images and facts) can be freely used under Attribution-ShareAlike license, unless stated otherwise. Cite this article:
British Rail Derby Lightweight Facts for Kids. Kiddle Encyclopedia.