The British Spotted is a small pony breed originating in England. It has existed for several centuries. The main distinguishing feature of the breed is its leopard-spotted colouration. The height at withers varies greatly, between 8 hands (32 inches, 81 cm) and 14.2 hands (58 inches, 147 cm). An even larger horse-type variant existed, but is nowadays considered to belong to the Appaloosa breed. The breed is unique for its unusual colouration and origins, and is rare with only about 800 registered animals.

The most prominent feature of the British Spotted Pony is the leopard-spotted colouring, coming in many variations. Other forms of spotting are not permitted. Other requirements, consistent with leopard genetics, include rosy pink, mottled skin around the eyes, muzzle and inside the ears, and a white sclera (in most other horses the "white" of the eye is dark, matching the iris). The hooves must be striped.

The British Spotted Pony is a breed with clear pony characteristics. It is hardy and very active, and its height varies from as little as 8 hands (32 inches, 81 cm) up to 14.2 hands (58 inches, 147 cm); there is also a powerful cob-type riding pony variation. However, the smallest animals are the most popular, and are often sold for showing and as companion ponies. Some are also driven.

The spotted colouration does not always breed true, as two spotted animals may produce a solid-coloured foal. Many spotted animals are not registered because they lack a visible white sclera or striped hooves.

Paintings and drawings from across Europe over a range of centuries feature similarly spotted horses. A document from 1298 mentions that Edward I of England kept a large number of spotted horses.

Various other European horse breeds have been used from time to time to produce a more useful spotted horse. These included horses sent as gifts by royal families from elsewhere in Europe. A painting from the mid-19th century features a lady (believed to be Queen Victoria) in a carriage drawn by a spotted horse, followed by a spotted Dalmatian dog. Spotted ponies were popular for their colouration, and were sold for large sums of money. 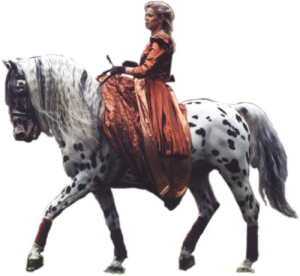 The Knabstrupper breed has been crossed with the British Spotted Pony.

In 1947, the British Spotted Horse and Pony Society was founded to register and preserve the breed. At this time both ponies and horses were registered. In the 1960s, the association imported Knabstrupper horses, another leopard-spotted breed, from Denmark, to help to make the colouration consistent. In 1976 the breed association split in two, the British Spotted Pony Society for ponies, and the British Appaloosa Society for horses. Today, larger spotted horses are registered as Appaloosas.

Interest in the breed has grown since World War II, with many horses exported to Australia, United States, Canada, Netherlands, Germany and France. However, the breed associations put a stop to exporting in the 1970s, when it was found that many of the best stallions and mares were lost due to high demand. Today the breed has about 800 registered ponies in its stud book, but it is believed that many unregistered animals of the breed exist.

All content from Kiddle encyclopedia articles (including the article images and facts) can be freely used under Attribution-ShareAlike license, unless stated otherwise. Cite this article:
British Spotted pony Facts for Kids. Kiddle Encyclopedia.