The Broad Street Market, founded in 1860, is located in the Midtown neighborhood of Harrisburg, Pennsylvania in the United States. Originally established on Broad Street (now Verbeke Street) by the Verbeke family, it is today one of the oldest continuously operating farmers markets in the country. 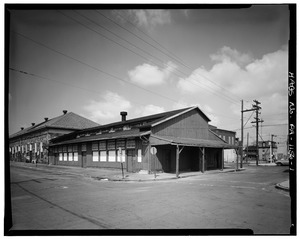 A Wood Market extending up to the former alleyway bisecting the market block. Photo date unknown.

During the American Civil War, the market helped to feed the 300,000 Union soldiers who mustered through nearby Camp Curtin.

The market is actually two separate structures. The older Stone Market house was completed in 1863. The Brick Market house was built between 1874 and 1878. For many years, a Wood Market extended between these two remaining buildings.

In 1979, ownership of the market was transferred to the City of Harrisburg, which operated the market until 1996 under a city-appointed agency. In 1996, the city completed a $2.5 million award-winning restoration of the Market complex, which was designed to reposition it as a successful and growth-oriented retail enterprise. In 1999, the City completed an additional $380,000 improvement to the stone market house.

It was placed on the National Register of Historic Places in 1974. 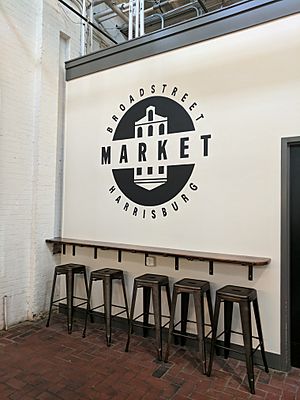 The Market's logo as seen from inside the Brick Building.

All content from Kiddle encyclopedia articles (including the article images and facts) can be freely used under Attribution-ShareAlike license, unless stated otherwise. Cite this article:
Broad Street Market Facts for Kids. Kiddle Encyclopedia.