Broadmoor is a neighborhood in Colorado Springs, Colorado.

Broadmoor was defined in 1901 as a plain in Colorado Springs. 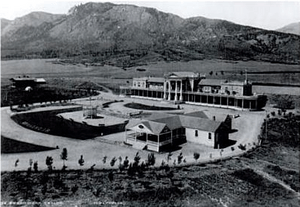 In the 1880s, Willie Wilcox and James Pourtales purchased the Broodmoor Dairy. Wilcox was a wealth man who came to Colorado for his health and Pourtales was a Prussian Count. They dammed part of Cheyenne Creek that ran through the dairy's property to create a man-made lake to make a more enticing environment for a hotel and casino that they were building. The city of Colorado Springs, in an effort to supplement the water needed to be supplied for the town, "continued to steal water". In a legal suit, Wilcox and Pourtales were deemed the water rights holder. Their company went bankrupt and was reorganized as the Broadmoor Land and Investment Company. The London and New York Investment Company bought their organization in 1893 and in 1897 completed the construction of the lake and casino, which was formally landscaped, had grounds for polo and golf games, pigeon shooting, and gambling. The resort and casino were fashioned for wealthy guests and the buildings had European architecture. The Broadmoor Dairy was owned by Dr. Robert M. Smith in 1898.

In 1898, Broadmoor was 1 mile (1.6 km) southwest of the city limit and was about 2 miles (3.2 km) long. Piedmont was south of the east end of Broadmoor. The Broadmoor Casino and the Cheyenne Mountain Country Club were on the Colorado Springs and Interurban Railway Cheyenne Canon street car line in 1898.

In 1916, Broadmoor was described as fashionable suburb with many beautiful mansions on Cheyenne Road between Lake and Circle. Colorado Springs Gun Club had several locations, one of which was in Broadmoor at 7th and Vine. The Myron Stratton Home was in Broadmoor in 1916. The Broadmoor resort had an electric light plant and greenhouse on Lake Circle.

The Broadmoor, including its Broadmoor Golf Club, opened in 1918. In 1919, aircraft flights began to and from the hotel's neighboring fields.

All content from Kiddle encyclopedia articles (including the article images and facts) can be freely used under Attribution-ShareAlike license, unless stated otherwise. Cite this article:
Broadmoor, Colorado Facts for Kids. Kiddle Encyclopedia.