The Broadmoor facts for kids

The Broadmoor is a hotel and resort in the Old Broadmoor neighborhood of Colorado Springs, Colorado. The Broadmoor is a member of Historic Hotels of America of the National Trust for Historic Preservation. Its visitors have included heads of state, celebrities, and professional sports stars.

The architecture and color of the hotel is in the Mediterranean Revival style, with the pink stucco of its façade blending into the Pikes Peak area landscape. The main buildings are connected on a circular path around a lake. The original hotel building is Broadmoor Main, which was built in 1918. The others—built between 1961 and 2001—are Broadmoor South, Broadmoor West, Lakeside Suites and West Tower.

The Broadmoor has 784 rooms. Many of the Broadmoor South rooms have balconies and some have fireplaces. The Penrose Room restaurant is located on the top of the nine-story building. A total of eighteen restaurants are located in the main hotel buildings, as well as the golf club, pool cafes, Summit Restaurant, and Golden Bee pub. Broadmoor Golf Club has three golf courses, designed by Donald Ross, Robert Trent Jones and Ed Seay and Arnold Palmer.

A view from the main building of the hotel facing west

The full-service spa has an indoor pool, fitness center, 43 treatment rooms, relaxation room, and hair and nail salon. The resort has indoor and outdoor pools and tennis courts. There are 25 retail shops, including clothing boutiques and other shops.

A .75 miles (1.21 km) trail goes around Cheyenne Lake, which was manmade and is creek-fed. In the summer guests can rent bikes and paddleboats. The Stables at the Broadmoor offer horseback riding.

The Penrose Heritage Museum on the property, formerly called the El Pomar Carriage House Museum, houses a collection of vintage carriages and automobiles. The latter include race cars from the Pikes Peak Auto Hill Climb in the early 20th century.

The Broadmoor has 185,000 square feet (17,200 m2) of meeting space. It earns 70% of its revenue from conventions. The Broadmoor Fire Protection District serves the resort and surrounding area.

The Broadmoor offers a luxurious mountain experience at their 16-acre Ranch on Emerald Green on Cheyenne Mountain. Philip Anschutz purchased the property and built a main lodge and ten cabins and restored other original buildings. There are two small lakes, horse stables, a gazebo, hot tubs, and an outdoor fire pit.

Located 75 minutes west of the Resort along a five-mile stretch of Tarryall River, The Broadmoor Fishing Camp borders 120,000 acres of the Lost Creek Wilderness. 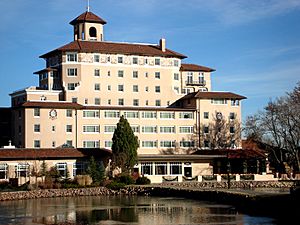 Spencer Penrose bought the property in 1916 and joined by partners Albert E. Carlton and C.M. MacNeill commissioned New York architects to design The Broadmoor as a "Grand Dame of the Rockies", evoking the elegant look, excellent service, and fine cuisine of celebrated European hotels . Architects Warren and Wetmore, who designed Ritz-Carlton and Biltmore Hotels, were hired to design the hotel buildings. Frederick Law Olmsted, Jr., son of the famed designer of Central Park and an accomplished landscape architect in his own right, took on the challenge of The Broadmoor's 3,000 acres.

Penrose hired Donald Ross, a golf architect, to design the first golf course. At the time, the golf course had the highest elevation of any in the United States. Far Eastern and European artwork and antiques were purchased for the hotel. A traditional English pub was dismantled, shipped to the United States, and reassembled at the resort. The resort had one of the first full-service spas in the country and a supervised activities club for children. Penrose's goal was to build "the finest hotel in the United States". The partnership spent $3 million (equivalent to $28,301,552 in 2018) seeking to realize his dream. The resort's grand opening was in 1918. 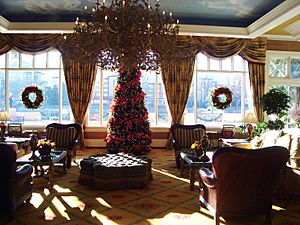 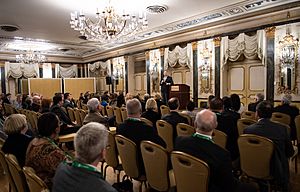 Hotel ballroom, in this case used for a NASA presentation speech with the agency Administrator

During the Great Depression the hotel's business slowed, and it went into receivership in 1932. Penrose's El Pomar Investment Company sued the hotel and purchased it, becoming the sole owner. In 1937 Penrose and his wife Julie established the El Pomar Foundation, intended to provide grants to support activities in the state of Colorado.

The Broadmoor Ice Palace, an Olympic training center, opened on January 1, 1938 on the resort grounds. It held a total of fourteen National Sports Festivals, World Figure Skating Championship, and U.S. Figure Skating championships. It was renamed in 1961 as the Broadmoor World Arena. Also in 1938, the Will Rogers Memorial Stadium was built across Cheyenne Lake from the hotel. Large concerts, rodeos, and Native American dances were held here.

After Penrose died in 1939, the hotel, the Mt. Manitou Incline, the Manitou and Pike's Peak Railway, and a sizable amount of his fortune, transferred to the Foundation. Charles L. Tutt, Jr., secretary of the Broadmoor Hotel and Land Company, and son of Penrose's longtime friend and partner, was made president.

As a memorial to her husband Mrs. Penrose had the Carriage House Museum (now the Penrose Heritage Museum) built for his collection of carriages and automobiles. She moved into the hotel's sixth floor in 1944.

In 1959 a ski area was built for the resort. The 144-room Broadmoor South and the International Center were built in 1961. William Thayer Tutt, son of Charles Tutt, Jr., was chosen as the hotels' president that year.

On February 15, 1961, members of the U.S. Figure Skating Team were killed during the airplane crash of Sabena Flight 548 near Brussels, Belgium. Eighteen skaters and 16 others associated with the team died on their way to the World Figure Skating Championships. A memorial bench made of granite was installed across from the entrance to the World Arena building (now razed) at the edge of the resort's lake.

The second golf course was designed by Robert Trent Jones, Sr. and installed in 1965. Russell Thayer Tutt, another son of Charles Tutt, Jr., became president of The Broadmoor in 1975. The resort was located within the unincorporated village of Broadmoor until it was annexed into the city of Colorado Springs in 1980. Following attempts to revert the annexation legally, the Colorado Supreme Court upheld the annexation in 1982. The third golf course was designed in 1976 by Ed Seay and Arnold Palmer.

Colorado Hall, the resort's second conference center, was built in 1982. In 1986, the resort closed Ski Broadmoor. The City of Colorado Springs and Ski Vail took it over in order to keep it open. It closed in 1991.

Due to the impact of the Tax Reform Act of 1969, the foundation sold its majority interest of the resort in 1988. The resort was renovated after The Oklahoma Publishing Company gained controlling interest in 1989.

Between 2003 and 2008, the resort was expanded to include a group of retail stores, 160 luxury townhomes and condominiums, rooftop tennis courts, underground parking, and expansion of the third golf course.

Purchase by the Anschutz Corporation

The Anschutz Corporation purchased the resort in 2011. President and Chief Executive Officer Steve Bartolin continued to run the hotel.

The hotel's name and logo is always officially presented as all uppercase except for the 'A', which is smaller but raised higher than the other letters: BROADMOOR. In spite of various urban legends associated with the configuration, original copyright documents filed December 15, 1918, reveal the alteration was necessary in order to obtain exclusive copyright, because there had been other uses of the word Broadmoor in titles in the nearby area since the 1880s.

The resort has been the site of tournaments, such as the US Women's Open and the US Senior's Open, since its first years in operation. The first Broadmoor Invitation Golf Tournament was held in 1921. National Figure Skating Championships were held at The Broadmoor in 1948 and 1973. The National Collegiate Athletic Association (NCAA) golf tournament was held in June 1957. Five years later, World and European Hockey Championships were held at The Broadmoor.

The Broadmoor World Arena was the site of the World Figure Skating Championships in January 1966.

The resort has also been the site of other championships. Broadmoor East hosted the World Senior golf tournament in 1966. The United States Sporting Clays Association (USSCA) had its national sporting clays championship in 1990 at the Broadmoor. The 2011 U.S. Women's Open was held at The Broadmoor.

In 2005, Chet Murphy was inducted into the Colorado Tennis Hall of Fame, in recognition for his contributions in developing The Broadmoor resort as one of the leading tennis centers in the United States.

Some of the awards that the resort has received include:

All content from Kiddle encyclopedia articles (including the article images and facts) can be freely used under Attribution-ShareAlike license, unless stated otherwise. Cite this article:
The Broadmoor Facts for Kids. Kiddle Encyclopedia.