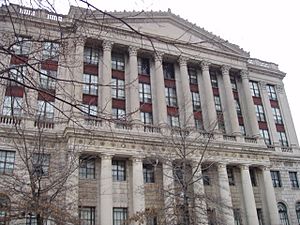 In the 1950s and 1960s, the Mutual Benefit building housed the Essex Catholic High School. Today it is the Broadway House nursing home. 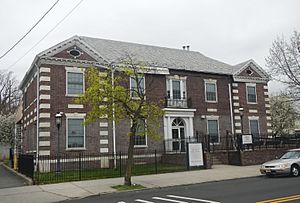 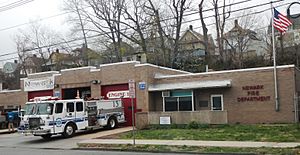 Broadway is an neighborhood within the city of Newark in Essex County, New Jersey, United States. It is located on the west bank of the Passaic River, in Newark's North Ward, east of Forest Hill and north of Seventh Avenue. The neighborhood extends from Interstate 280 to Belleville. The term "Broadway" has only come into use recently, most Broadway residents simply refer to their area as part of the North Ward. The street itself "Broadway" was called "Washington Avenue" until the early twentieth century. Today, the area is predominantly Italian American, Puerto Rican and Dominican, with a growing population from other parts of Latin America. The New Jersey Historical Society was located here from the 1930s to 1997. The neo-classical Mutual Benefit building was constructed in the Broadway neighborhood in 1927. The district has many old brownstones in various states of repair. There are high-rise apartment buildings overlooking Branch Brook Park.

This part of Broadway Avenue was called Washington Avenue until property owners led by Franz Kaiser formed the Broadway Association to rename it and advocate for improvements on the thoroughfare.

The central portion of Broadway is sometimes called Mount Pleasant. It is roughly bounded by Herbert Place, Arlington Avenue, Mt. Prospect Avenue, 4th Avenue and the Passaic River. This neighborhood is home to Mt. Pleasant Cemetery.

South Broadway is the area bounded by Broad Street, Broadway, Bloomfield Avenue on the west, 4th st on the north, the Passaic River on the east and I-280 on the south. South Broadway is home to the oldest functioning synagogue in Newark, Ahavas Sholom. Currently, the Jewish Museum of New Jersey located on the synagogue's second floor. The Pavilion and Colonnade Apartments are the located at the southern end of the neighbourhood.

All content from Kiddle encyclopedia articles (including the article images and facts) can be freely used under Attribution-ShareAlike license, unless stated otherwise. Cite this article:
Broadway, Newark Facts for Kids. Kiddle Encyclopedia.