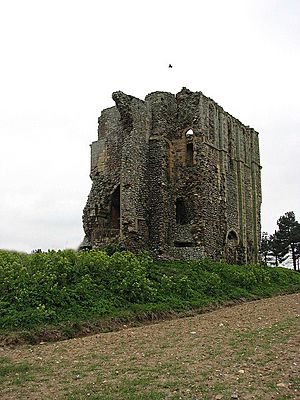 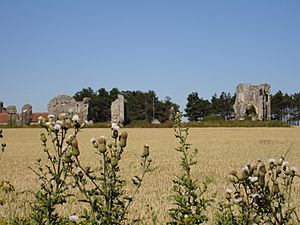 Bromholm Priory was a Cluniac priory, situated in a coastal location near the village of Bacton, Norfolk, England

Bromholm Priory, also known as Bacton Abbey, was founded in 1113 by William de Glanville, Lord of Bacton, and was originally subordinate to Castle Acre Priory until 1195 when it was exempted by Pope Celestine III. King Henry III visited the priory in 1223 to take the holy waters and dedicate to the relics; lands nearby were controlled by the all-powerful Justiciar Hubert de Burgh. From this priory we have the Bromholm Psalter dated to the early fourteenth century. The priory was suppressed in 1536. All that now remains are the ruins of the gatehouse, Chapter House, and the northern transept of the Priory Church.

It was an important object of pilgrimage as it claimed to possess a piece of the True Cross, mentioned as the 'holy cross of Bromeholme' in Chaucer's The Reeve's Tale and William Langland's Vision of Piers Plowman.

It was a benefice of the Paston family and is featured in their letters.

In 1940 the base of the central tower of the priory church was modified to act as a pillbox in case of German invasion.

All content from Kiddle encyclopedia articles (including the article images and facts) can be freely used under Attribution-ShareAlike license, unless stated otherwise. Cite this article:
Bromholm Priory Facts for Kids. Kiddle Encyclopedia.