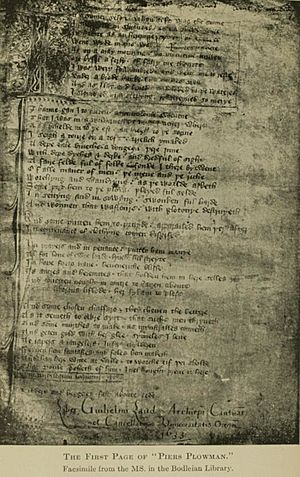 The first page of one of the manuscripts of Piers Plowman

William Langland (c. 1332 – c. 1386) was an English poet. He wrote a long and complicated poem called Piers Plowman. The poem is an allegory about the struggle to lead a virtuous Christian life when the institution of the Church is often corrupt.

We do not know for sure that this poem was written by Langland. The strongest evidence we have is one manuscript which says that the poem was written by 'Willielmi de Langlond', son of 'Stacy de Rokayle, who died in Shipton-under-Wichwood, a tenant of the Lord Spenser in the county of Oxfordshire'. Other manuscripts also name the author as 'Robert or William langland', or 'Wilhelmus W.' (probably an abbreviation for 'William of Wichwood', since Wychwood is the village he probably came from). Another piece of evidence is within the poem itself. At one stage the narrator says: 'I have lyved in londe...my name is longe wille'. Scholars agree that this is a code for the poet's name: Longe-Land, and Wille meaning Will, short for William. This may seem unlikely, but this method of hiding the poet's name within a poem was used in Roman times, and was quite common in late-medieval literature.

All content from Kiddle encyclopedia articles (including the article images and facts) can be freely used under Attribution-ShareAlike license, unless stated otherwise. Cite this article:
William Langland Facts for Kids. Kiddle Encyclopedia.