Cleobury Mortimer is a market town and civil parish in Shropshire, England, which had a population of 3,036 at the 2011 census. One of the smallest towns in Shropshire, it was granted its market charter in 1253.

The town is usually referred to simply as Cleobury. Several pronunciations of the town's name are in use. In Cleobury itself "Clib-bree" is commonly used, while in surrounding areas variations such as "Cleb-bree" and "Clee-bree" are used.

The name is believed to derive from the contraction of the Old English clifu meaning a steep place and bury meaning fortified settlement. Mortimer comes from Ranulph de Mortimer of Normandy to whom the land was granted after the Norman conquest. He founded the Mortimer dynasty of Marcher Lords who held power in the Welsh Marches throughout the Middle Ages and were closely involved with power struggles with successive English monarchs and other powerful Lords. Cleobury has a significant entry in the Domesday Book, and the vicinity was the location of at least two castles. Cleobury Castle, which was situated near St Mary's Church, was destroyed in 1155 and only earthworks remain today. Toot Castle was situated on the other side of the River Rea from the town. 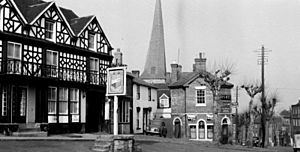 The central section of the town was laid out in burgage plots, the lines of which are still evident. With the decline of the Marcher Lords, and peace along the Welsh border, Cleobury's importance declined during the Middle Ages, leaving it as an undistinguished market town, albeit with a dependent hinterland. In the 16th century, exploitation of local iron ores became important, and when Elizabeth I granted the town to Robert Dudley, Earl of Leicester, his familiarity with modern ironworking technology led to the establishment of an important iron industry, with at least two furnaces (in which iron ore was converted to pig iron) and two water-powered forges (in which pig iron was converted to wrought iron). For a while, Cleobury's iron industry was an important part of the general industrialisation in Shropshire (sometimes claimed as the seat of the Industrial Revolution), and iron from Cleobury's forges was valued as a high-quality material. However, poor transport connections led to the decline of Cleobury's iron industry in the early 19th century, and soon the town reverted to being an agricultural hub, although a large water-powered paper mill survived on the River Rea until a catastrophic fire towards the end of the century. By 1900, the town was an important civic centre, with a railway station, union workhouse, magistrates' court, police station, Agricultural College, Infants' School and Primary School. Since the start of the twentieth century, Cleobury lost many of these facilities, although its population has grown. It thus exemplifies a common pattern for rural settlements, where centralisation and the rise of road transport have seen a decline in the local provision of services, despite a rising population.

Two literary figures have strong connections with Cleobury: William Langland and Simon Evans. Langland, a contemporary of Geoffrey Chaucer, was almost certainly born in the vicinity in the 14th century, and is commemorated in the very fine and intricate (Victorian) East Window of St Mary's Church, as well as in a local road name. Simon Evans is a 20th-century writer, who fought throughout the First World War, and suffered from being gassed. He had been a postman on Merseyside before the war, and after the war sought a rural postal round, to soothe both nerves and body. Cleobury suited him well; here he blossomed, took a correspondence course in English, and became a successful writer and radio broadcaster in the 1930s. Heath Cranton published five of his books, and he married 'Auntie Doris' (Aldridge), a radio performer, but his new life was cut short in 1940, when the effects of the gassing finally caught up with him. His legacy is visible in the naming of a local street, a plaque on the old Post Office, and a dedicated local walk – 'The Simon Evans Way' – which the CM Footpath Association has created in recent years. 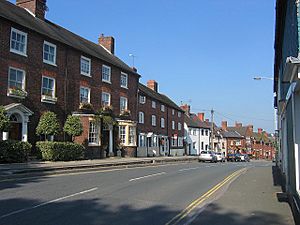 The A4117 as it passes through the town.

The River Rea runs to the east of the town, whilst through the town itself is the Pudding Brook, which flows from west to east before meeting the Rea. The land gradually rises from 110 metres above sea level near to the river, to 150 metres in the west of the town. The Clee Hills, the highest hills in Shropshire, are nearby and the Wyre Forest lies between the town and Bewdley. The border with Worcestershire is a mile to the south.

The A4117 Kidderminster to Ludlow road runs through the centre of the town and crosses the River Rea at New Bridge. The B4363 runs between Cleobury Mortimer (its junction with the A4117 being immediately east of New Bridge) and Bridgnorth. The county town, Shrewsbury, is some 33 miles (53 km) distant by road, making Cleobury the most distant town from Shrewsbury in the county.

Cleobury was formerly served by two now-defunct railways: the Tenbury & Bewdley Railway and the Cleobury Mortimer and Ditton Priors Light Railway. The opening of the latter in 1908 elevated Cleobury Mortimer station (which was located some distance from the town, in the Wyre Forest) to the status of a 'Junction'. A separate station called Cleobury Town existed nearer the town, but only on the Ditton Priors line. Today the nearest railway stations are on the heritage Severn Valley Railway, with the nearest mainline stations at Ludlow and Kidderminster. There is a regular bus service (the 2L; formerly number 292) that runs between Ludlow and Kidderminster, calling at Cleobury.

The civil parish of Cleobury Mortimer has no notable settlements other than the town itself, though covers a large rural area including part of the Wyre Forest. The parish council does not style itself as a town council and does not elect a mayor.

To the north lie the settlements of Neenton and Neen Savage, and to the southwest lies the small village of Neen Sollars. "Neen" was the name of the River Rea in the past. Further to the north lies Cleobury North, a small village with the same etymological root.

There are a number of landmarks in the town, the most famous of which is the 12th-century St. Mary's church in the town centre, renowned for its crooked spire, the combined result of the warping of its oak timbers, and damp-induced rot where the timber spire sits on the masonry tower. Across the road from the churchyard is The Wells, fed from a local spring and for centuries serving as a public water supply. In 2010, for reasons as yet unexplained, the inflow to The Wells ceased for a while, and has only been intermittent since then. To the west of the church is the recently refurbished Market Hall, which now houses a number of facilities including the Tourist Information Centre.

There are six public houses in the town of Cleobury, with a further one (the Blount Arms) on the A4117 road in the direction of Kidderminster. The town also has a secondary school, Lacon Childe, a primary school, library, post office, fire station, and police station.

The town featured in a series of reports by Declan Curry in BBC Breakfast in June 2006. As part of the series, Curry interviewed a number of local residents and business owners to learn more about the rural economy.

All content from Kiddle encyclopedia articles (including the article images and facts) can be freely used under Attribution-ShareAlike license, unless stated otherwise. Cite this article:
Cleobury Mortimer Facts for Kids. Kiddle Encyclopedia.