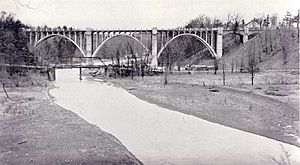 The Bronte Creek bridge in 1936, built as part of The Middle Road, now known as the Queen Elizabeth Way. The original iron truss bridge from the country lane is in the foreground.

Bronte Creek is a waterway in the Lake Ontario watershed of Ontario Canada. It runs through Hamilton and Halton Region, with its source near Morriston (south of the intersection of Highway 6 and Highway 401), passing Bronte Creek Provincial Park, on its way to Lake Ontario at Bronte Harbour in Oakville, where the creek is also known as Twelve Mile Creek.

It was previously known to the Mississauga First Nation as Esqui-sink, Eshkwessing or ishkwessin (that which lies at the end).

Just south of the Queen Elizabeth Way at the Bronte Road exit, the creek has exposed an outcrop of Queenston Formation red shale with narrow, greenish layers of calcareous sandstone and silty bioclastic carbonate.

All content from Kiddle encyclopedia articles (including the article images and facts) can be freely used under Attribution-ShareAlike license, unless stated otherwise. Cite this article:
Bronte Creek Facts for Kids. Kiddle Encyclopedia.