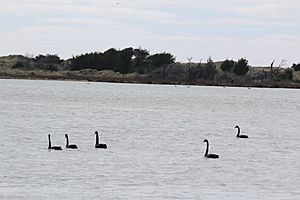 Brooklands Lagoon is technically a very elongated estuary near Brooklands, Christchurch. The Styx river drains into it and it is at the mouth of the Waimakariri river. The Waimakariri used to drain out of Brooklands Lagoon towards the Spencer Park end. This changed when engineers dug through the sand dunes to provide a more direct course to the sea in 1930 in order to reduce the risk of flooding from the Waimakariri River. The Lagoon is protected from the Pegasus Bay (and the sea) by Brooklands Spit. To the south of it is Bottle Lake Forest and Spencer Park. The lagoon is approximately 270 hectares in size, 4.5 kilometers long and 800 meters at its widest. Spring tides will bring approximately 1.6 million cubic meters of water into the lagoon.

It was frequently used by the locals prior to the 2010 and 2011 Christchurch earthquakes, where most of Brooklands was red zoned and effectively wiped off the map.

The Christchurch City Council installed a public toilet which won an architectural award. The six square meter building was designed to be a low-maintenance building which recognises the perspectives of local iwi and the history of the site yet will deter vandalism. It was completed in 2011 and cost $80,000. 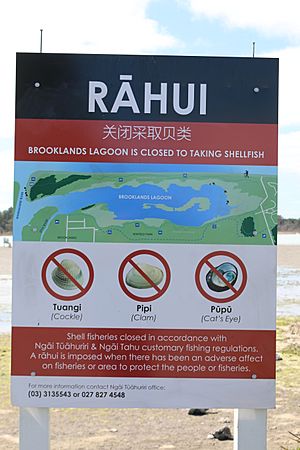 In late 2020, Brooklands Lagoon was closed to the collection of shellfish (cockles, pipis, cat's eyes, clams) in accordance with the Ngai Tuahuriri and Ngai Tahu customary fishing regulations. This is in order to protect the fisheries.

All content from Kiddle encyclopedia articles (including the article images and facts) can be freely used under Attribution-ShareAlike license, unless stated otherwise. Cite this article:
Brooklands Lagoon Facts for Kids. Kiddle Encyclopedia.