Brother and Sister facts for kids

"Brother and Sister" (also "Little Sister and Little Brother"; German: Brüderchen und Schwesterchen) is a European fairy tale which was, among others, written down by the Brothers Grimm (KHM 11). It is a tale of Aarne–Thompson Type 450. In Russia the story was more commonly known as Sister Alionushka, Brother Ivanushka, and collected by Alexander Afanasyev in his Narodnye russkie skazki.

The first recorded appearance of Brother and Sister is in Giambattista Basile's Pentamerone around the 17th century. It was written down as the tale of Ninnillo and Nennella. Since then it has circulated in a number of European countries under varying titles but with most of the main story intact. In Russia the story was more commonly known as Sister Alionushka, Brother Ivanushka, and collected by Alexander Afanasyev in his Narodnye russkie skazki.

A shorter version of the tale was published by the Brothers Grimm in the first edition of Kinder- und Hausmärchen in 1812, then substantially expanded and revised in the second edition (1819). Their version is based on the account of the German storyteller Marie Hassenpflug (1788–1856).

Tired of the cruel mistreatment they endure from their wicked stepmother, who is also a witch, a brother and sister run away from home, wander off into the countryside, and spend the night in the woods. By morning, the boy is thirsty, so the children go looking for a spring of clear water. However, their stepmother has already discovered their escape and has bewitched all the springs in the forest. The boy is about to drink from one, when his sister hears how its rushing sound says "Whoever drinks from me will become a tiger".

Desperately, the girl begs her brother not to drink from the spring, lest he transformed into a tiger and attacked her. So they continue on their way, but when they come to the second spring, the girl hears it say, "Whoever drinks from me will become a wolf". Again, she desperately tries to prevent her brother from drinking from it. Reluctantly, he eventually agrees to her pleas but insists he drink from the next spring they encounter. And so they arrive at the third spring, and the girl overhears the rushing water cry, "Whoever drinks from me will become a deer". But it is too late, because her brother has already drunk from it, and changes into a deer. 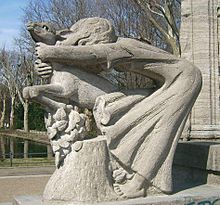 Sculpture "Brother and Sister", created in 1970 by Katharina Szelinski-Singer

As the initial feeling of despair clears up, the children decide to live in the woods forever. The girl takes care of her brother, and ties her gold chain around his neck. They go to live in a little house deep within the woods and live there happily for some years, until they are disturbed one day by a hunting party and the king himself who has followed the strange deer home. Upon seeing the beautiful girl, he immediately asks her to marry him and she accepts. Thus she became queen and they all live happily in the king's castle. Time passes and the queen gives birth to a son.

Their stepmother, however, soon discovers that they are still alive, and plots against them. One night, she kills the queen and replaces her with her own disfigured daughter, whom she has transformed to resemble her. When the queen's ghost secretly visits her baby's bedside for three consecutive nights, the king catches on and her stepmother's evil plan is exposed.

The queen comes back to life when the king embraces her, and her stepfamily are tried for their crimes. The daughter is banished into the woods and torn to pieces by wild animals, and the stepmother is burned at the stake. At the exact moment of her death, the deer becomes human again, and at long last the family is reunited, where they lived happily ever after.

"Brother and Sister" is similar to other AT-450 tales, such as "The Lambkin and the Little Fish".

In some versions the queen is not killed but merely put in a trance by the wicked stepmother until she is awakened by the king.

Nippon Animation Company of Japan featured the story in one episode of season two of its anime television series, Grimm's Fairy Tale Classics. The siblings are given names other than their "titles": Rudolph for the Brother, Rosa for the Sister. Rosa is not murdered by the Witch, but instead is abducted and forcibly taken into a mountain. She uses some sort of bilocation to send out her soul and feed her baby, but it weakens her greatly in the process; her husband the King and his soldiers rescue her right before she withers away. The evil stepsister is omitted from the story, and the Witch dies offscreen rather than being burned at the stake.

A Hungarian variant of the tale was adapted into an episode of the Hungarian television series Magyar népmesék ("Hungarian Folk Tales"), with the title Cerceruska. In this version, the maiden has a little sister who drinks from the pool of water in the woods and is transformed into a deer.

Contemporary literary works that draw upon this fairy tale and its analytical themes include "In the Night Country," a story by Ellen Steiber, "Brother and Sister," a poem by Terri Windling, and "Sister and Brother," a poem by Barth Anderson.

All content from Kiddle encyclopedia articles (including the article images and facts) can be freely used under Attribution-ShareAlike license, unless stated otherwise. Cite this article:
Brother and Sister Facts for Kids. Kiddle Encyclopedia.