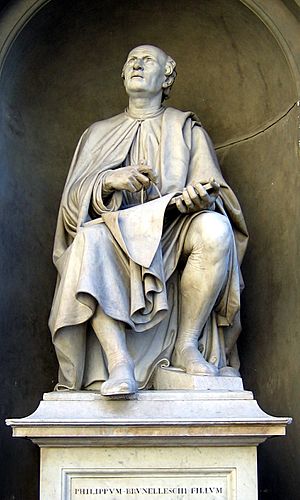 Sculpture of Brunelleschi looking at the dome in Florence

Filippo Brunelleschi (1377 – April 15, 1446) was one of the most important architects of the Italian Renaissance. All of his most well-known works are in Florence, Italy.

The principal buildings and works designed by Brunelleschi or which included his involvement:

All content from Kiddle encyclopedia articles (including the article images and facts) can be freely used under Attribution-ShareAlike license, unless stated otherwise. Cite this article:
Filippo Brunelleschi Facts for Kids. Kiddle Encyclopedia.